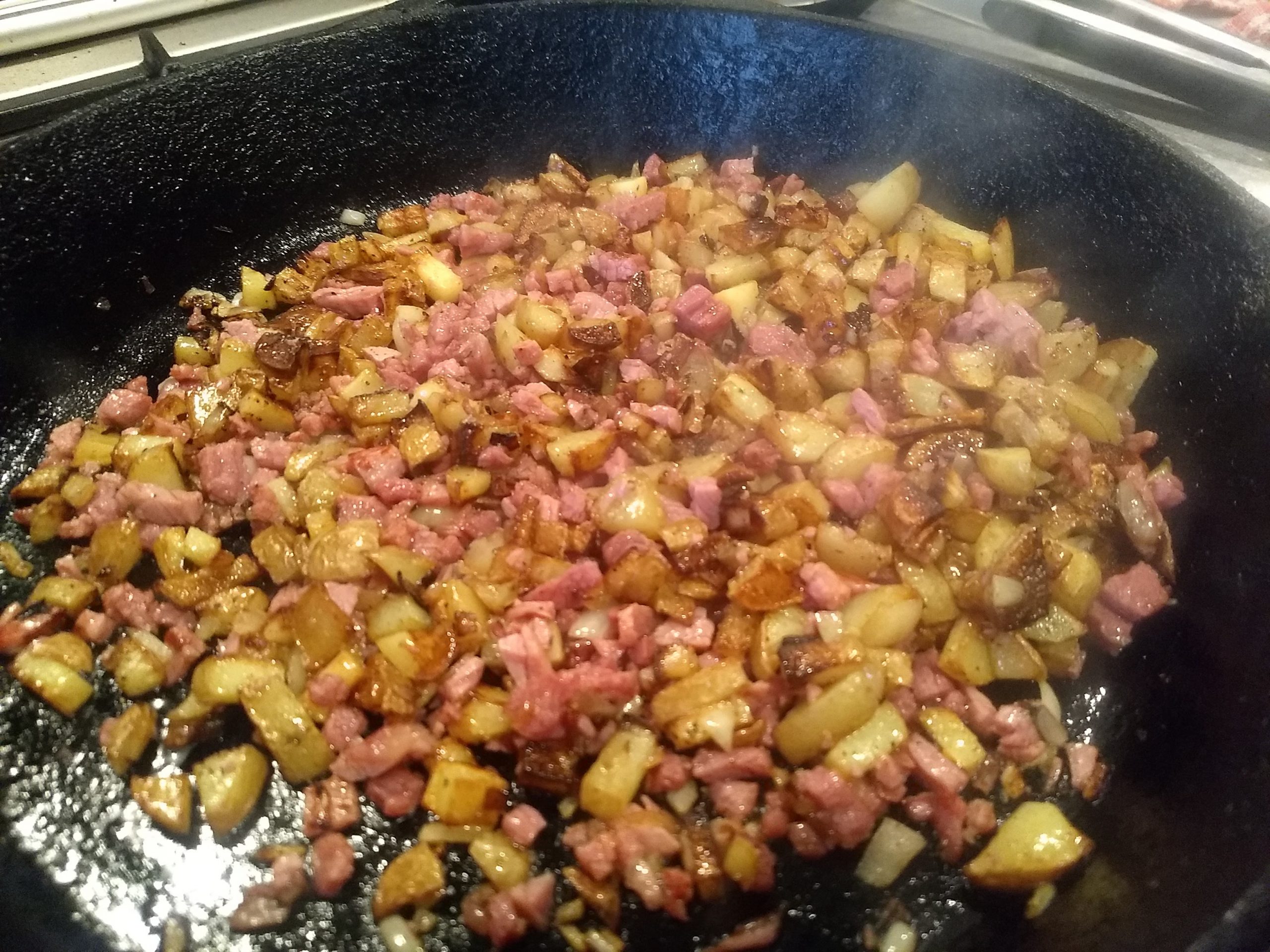 I shit you not, this is, officially, Corned Beef Hash Day. How did I know this, you ask? Easy: I didn’t.

Then I happened to look up random facts about corned beef hash, to try to make this post a little more amusing, and BAM! There it was. Today. Corned Beef Hash Day. What are the chances.

What is corned beef hash?

It’s corned beef that is chopped (because “hacher” in French means “to chop”). Of course, CBH (I’m tired of typing it out…) originated in England, they claim, and we all know how much the English get on with the French. Perfectly sensible. (Why do we preserve so many French words in English, like “connoisseur” and “omelette” and “apostrophe” and “soup”? Linguistic colonialism?) ((Wait, “apostrophe“? Seriously?))

Obviously this raises the obvious question: what does it mean to “corn” beef? Obviously.

Well, “corn”, in French, is “pink”, and so to corn beef is to pinken it. And that’s why corned beef is pink.

(That’s false, but you’ll never look it up, will you?)

((It’s essentially tough beef made tender by, more or less, pickling it with “corns” of salt. Yum. Pickling.))

Are there many different recipes?

There are three. I used a popular search engine to see how many results it could find for “corned beef hash recipe” and it found 8.77 million. That number is FALSE.

This is the best recipe you’ll find written by an American who’s been in New Zealand for ten years and can’t remember a large portion of his past.

Oh wait, those potatoes aren’t chopped! And you’re asking, what size do I chop the potatoes? Your answer will appear forthwith!

Do you peel the potatoes? Well, the answer depends on how much you value your time. Potato skins contain lots of vitamins and shit (totally unbiased reference to potatogoodness.com, which, like nearly everything in the big old universe, for reasons we will never fathom, exists independent of human consciousness.)

In response: I value my time. So. No. No I don’t peel the potatoes.

First, using a non-stick, cast-iron pan (cast iron is non-stick when it’s hot enough), get those potatoes frying in some butter (or oil if you want; I’m not fussy). What does it look like when potatoes fry in this manner? Like this:

At this point, they’re nice and golden and toasty. Mmmm. And no, you didn’t miss anything: I have added zero seasonings. (Don’t worry; we’ll get there.)

The way I operate, I like to use one skillet if I can. And in this case, I can.

Next, I’ll scrape the potatoes to one side of the skillet and add the onions, then let them caramelise a bit. Mmmm that onion-y sweetness. Like this:

Oh dear. A little bit of the corned beef snuck in there. Oops. Am I bothered?

That looks good enough doesn’t it? Everything will cook slightly more with the next step, which I take to be obvious.

Next, add the hacher-ed corned beef (my, that’s redundantly repetitive):

This is the point at which I sprinkled in some seasonings. But you don’t need much. Corned beef already has a good flavour, and that’ll spill out into the potatoes pretty well.

Eventually, this goes in a bowl and looks fucking amazing:

Lemme tell ya, that bowl was empty pretty quick. And not because I spilled it.

Now, you’ve seen fancy recipes for corned beef hash, I’m sure. Some people use Worcestershire sauce. Some mash this stuff into cakes. Some fry an egg with it right there in the pan.

Mashed cakes? If that’s your thing. Who am I to judge.

Egg in the pan? Here’s the thing: I love eggs, especially fried. However, a powerful member of the household absolutely fucking hates eggs. The smell of eggs. The texture of eggs. The very word “egg” (even the French word “oeuf” conjures revulsion). And we’re all stuck inside during a pandemic, so did I fry an egg along side my delicious and incredibly simple corned beef hash?

And with that, Happy Corned Beef Hash Day!