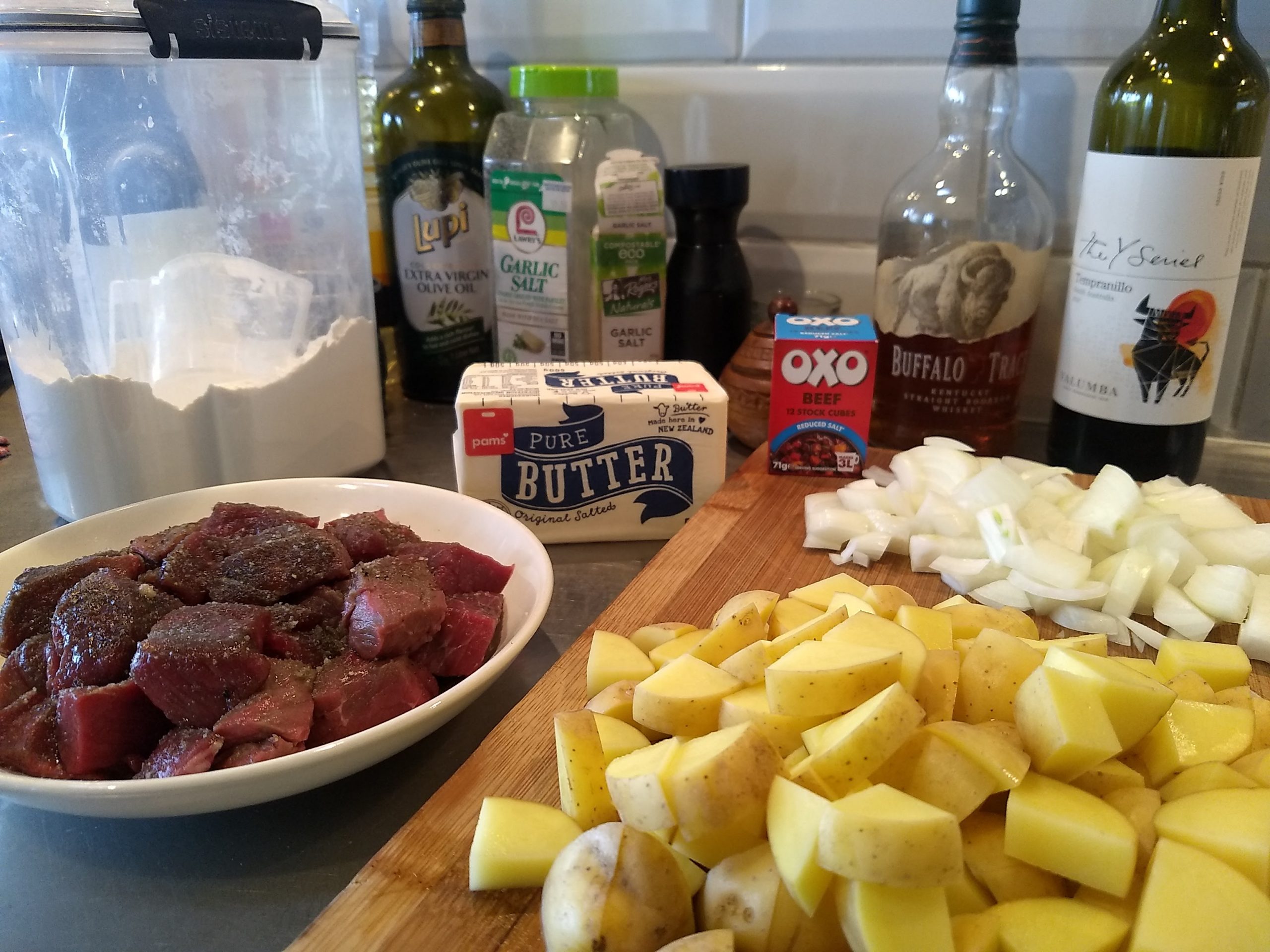 stew: 1. a dish of meat and vegetables cooked slowly in liquid in a closed dish or pan; 2. (informal) a state of great anxiety or agitation.

Ah, Beef Stew. I’m perfectly comfortable in myself to admit that I had to look up the difference between soup and stew — partly because I bought SOUP beef, not STEW beef, and given my frequent states of great anxiety or agitation, I was unsure how to proceed.

Now, why do we need an introduction to an absolute staple of basically every cuisine on Earth? (Am I overstating the pervasiveness of this dish? Probably. But the world is so very full of things, and many of those things are full of beef.) The answer: Beef Stew is controversial. Not controversial like Socialism and leaf blowers (you know how I feel about the devil’s motorised broom, yes?) Here the controversy concerns what makes the perfect Beef Stew. (Why am I capitalising Beef Stew? I don’t know, to be honest. But it started and now there seems no way to stop it, so I’m rolling with it.)

Our goal isn’t perfection. It’s simplicity and delicousnessocity. Ultimately, this recipe should be entirely uncontroversial, though obviously also perfect. (If you disagree, I invite feedback in the form of smoke signals or letters typed on vintage typewriters. Bonus points for carrier pigeon delivery.)

Let’s just start with the ingredients, most of which can be seen in the lead picture:

(* Vegan warning: Let’s note that both potatoes and onions are suitable for vegan consumption, so you can consider this a Partially Vegan recipe. But, if it’s pure veganity you’re looking for, these elements must be carefully extracted from the final product and washed of all their meatiness, flavour, and overall yum. Sorry. (I mention this because I thought, wouldn’t it be funny if someone tried to make vegan Beef Stew — since the very definition of “stew” includes the inclusion of meat. Of course, in an internet age, we’re twenty keyboard clicks away from a lengthy page of search results showing eleventy billion such insipid meatless meat stew recipes. It’s horrific. I didn’t dare click the “images” tab. But I’m tempted — just as I’m tempted by pimple popping videos. C’mon, you know you are too…. (Sometimes I wish I could smell the internet. I know, that’s weird, but it’s a fact about me; I truly believe we’re missing out. And there’d be a lot less pornography. Have you ever imagined how sweaty and shitty those sets must smell? Is it only me? It can’t be only me; we live in a world with vegan Beef Stew for chrissake!)))

(* Gluten tolerance warning: You can make a simple gluten-free version of this recipe by melting a tray of ice cubes and adding a single bun-less cheeseburger, minus the cheese. Salt to taste. Fuck off.)

Back to the very ideas of purity and perfection. There is, obviously, no perfect Beef Stew. This recipe is simple. Deceptively simple. Almost a foundation for other beef-related stews (not capitalised, for reasons I cannot identify). It’s the technique that makes it so delicious. Note there are only three main ingredients, two of which are vegan!

(“Fuck a Yam”: That could be a bumper sticker to advertise a fetish brothel franchise. (If you’re hip to urban slang, you’ll surely agree. If this doesn’t seem sufficiently punny, then I recommend you DO NOT search any website related to urban slang for the definition of the term “yam”. Simply move on. You can do it. I believe in you. This internet can’t possibly hold such sway…. (And I’m very glad I couldn’t smell that web search.)))

(Joke: What’s the difference between roast beef and pea soup? Anyone can roast beef.)

Back to the recipe and the techniques. (Finally.)

First, let’s make a roux. (Are you surprised? You must be new here. Welcome.)

(Edit: actually, this is the first-but-one step. Really first: salt the soup stew beef and let it come to room temperature — for a few hours at least I reckon. We’ve been through this.) First, heat up your cast iron skillet. When appropriately hot (you know how this works by now, yes?) sear the stew (I’m going to just call it stew beef from now on) beef. Why are we doing this? Well, we want to lock in some of the good juices and give it some structure and seared taste. If you simply drop stew beef in liquid, it’ll still be Beef Stew, but that beef will be entirely cooked by boiling, which is obviously a false thing to do. This searing step changes the taste, I swear.) It’ll look like this to start:

Second, remove the beef from the cast iron skillet. It’ll look like this by now:

(Note: this is not well done at all. (I mean the done-ness of the meat; in another sense, this is actually done incredibly well. Yay me!) There’s still plenty of pink available. But see those crispy bits: that’s what you’re looking for. Actually, they could have been crispier, if I’d let the pan heat up more, but you can’t win ’em all, right? Where would you put ’em?)

Next: add a bit more oil to the hot dirty skillet, bring it back to temperature, then add the diced potatoes. Get them a bit crispy as well, again to help preserve some structure when they’re in the soup stew. (Whatever the fuck it is.) They’ll look like this:

While you’re at it, caramelise the onion a bit. This will give it a slightly sweeter flavour, which is nice in the final soup stew, I think. If you don’t think so, then 1. you’re wrong; 2. skip this step, Wrongy McWrongFace. Here:

Now your main ingredients are ready to go. At this point, make a roux, then add all these stew chunks to the roux. Chuck in a bit of bourbon or beer if you’ve got some handy (note in the lead picture, as always, I had some handy). Lends a good taste to the beef. Or add it to the beef while it’s in the skillet alone. Hell, I don’t care. Just get some liquor into this dish to warm your heart’s cockles. Like this:

In this image, I’ve stirred everything around, coating the stuff with roux, more or less. Then I crushed a couple of those beef stock cubes and added some garlic salt and black pepper.

(This recipe has been quite serious, I feel, and not at all controversial. So I’ll add this: I don’t really have a problem with Socialism. Agree? Disagree? Leave a comment. (That’ll keep the newcomers busy; it’s my site, fuck comments, I like Socialism. Hah!))

(Joke: How do you make a milkshake? Give a cow a pogo stick. (Is he going to stop with the stupid puns? No. Obviously you haven’t met Brian.)

Now, add water and dump it all in your crock pot and let it crock (that’s a verb, right?) overnight — or at least as long as humanly possible. That’s what gets the beef all stewy (not angry, but moist and bursting with flavour. (I wish that was how I felt when I stewed.)) Check it:

That’s a lot of fluid, isn’t it? So is this stew or soup? (Oh the controversy!) The ingredients will absorb lots of water and it’ll thicken up over time. Don’t worry. And I can’t be bothered to stand guard over the damned crock pot while it’s crocking (I like this idea that “crock” might be a verb; is it? There’s no way to find out), so I just add a bit more water than I mean there to be. (Does that make sense as an instruction? No. No it doesn’t. Or I’m utterly incompetent (beef pun?))

After all’s said and done, serve with a slice of bread or something. It’ll look this awesome:

Yeah, that’s right. I ate the first bowl of this while sitting in my favourite blue chair. Those are my shoes down there. And a box from Office Max containing little Raymond’s school supplies. Oh and Charlie’s new basketball shoes. So there’s your little behind-the-scenes shot of life beyond my kitchen, you nosy bastards.