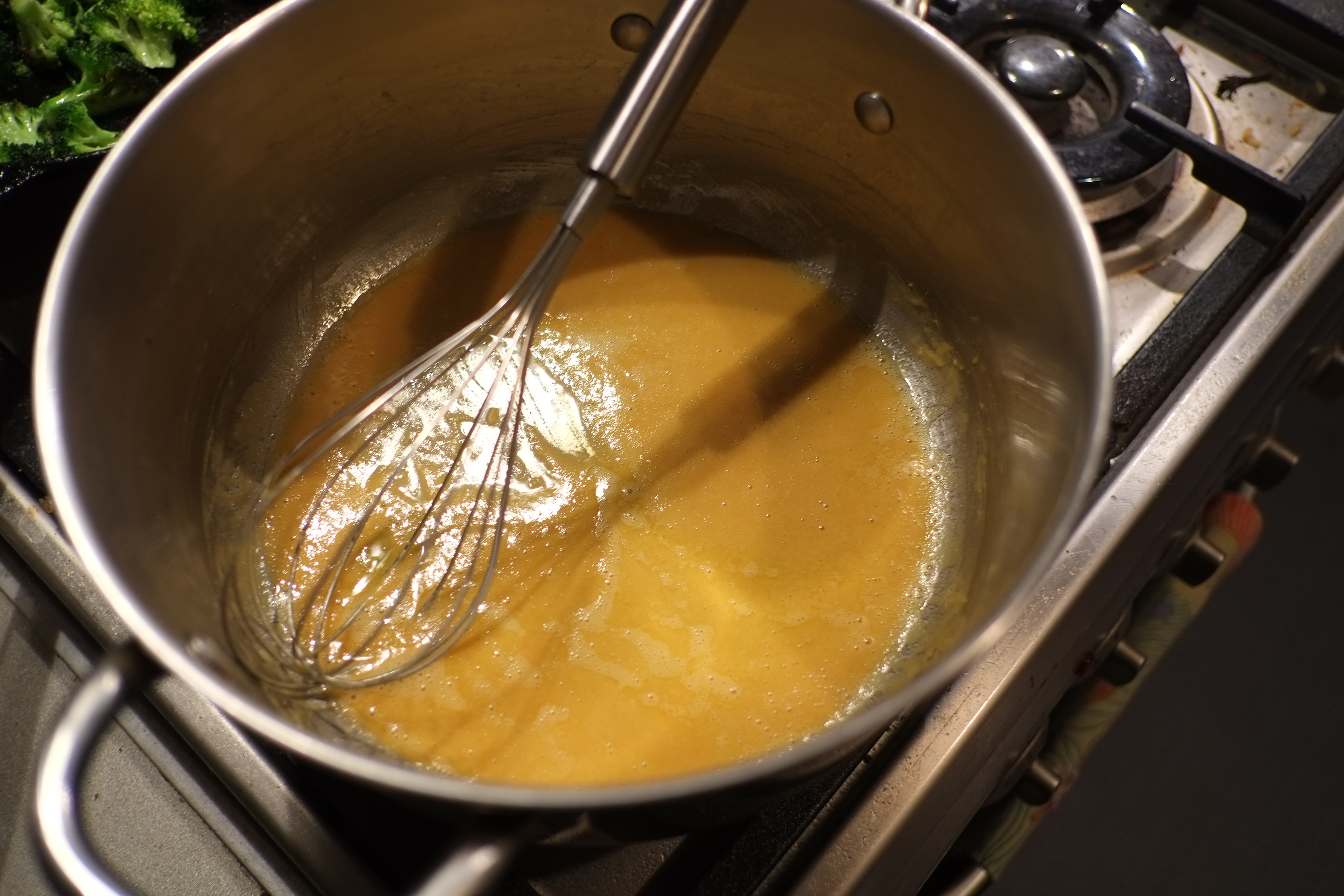 “Roux” is a French word, meaning ginger, as in red-haired. Interestingly, the recipe for roux calls for exactly zero hairs. Keep this in mind as we proceed.

I first learned about roux when I was working in the kitchen of a horribly pretentious golf course, run by horribly pretentious people, in particular the horribly pretentious chef, who wasn’t trained as a chef in any verifiable way. Consequently, he put on airs, presumably to puff up his otherwise-absent cheffiness. These airs instantly vaporised upon first taste of his ghastly and insipid dishes. (He and I did not get along. Shocking, I know.)

Aside: this golf course was host to a major PGA tour stop, and one year my assignment was to be the on-the-scene omelette cook on the breakfast buffet. One of the golfers — this was thirty years ago, so I can’t remember who, but he was a big name in the game — he had ordered his omelette and I made it and I was serving it when he stopped me and asked, regarding a clump of some other buffet fare: “What is this”? It was the chef’s special crab meat quiche, made with plastic-packaged, frozen crab meat — quite the opposite of pretension on that ingredient list I should say, pip pip.

I told the golfer, and he responded: “Mmm.” Oh, how surprising, I thought. Perhaps he’s savouring this lusciously-textured, freshly-defrosted food product. But then he continued, unfazed by my presence, precisely enunciating each adjective in this trenchant soliloquy:

“That is some nasty, foul-tasting shit.”

I recall bursting out laughing, serving the omelette, and enjoying a sense of vindication for several joyful hours. Come to think of it, I hold on to that vindication to this day. Maybe I’m a tad grudgie? So it goes.

To spin this positively, Mr Chef Guy introduced me to roux, and after I learned how pretentiously he had been fucking it up — he never waited long enough for peanut butter toastiness, for example, but we’ll get to that step in short order — I worked hard to develop my own technique.

Roux is simple. Ingredients are:

First release all pretension, because all you truly need are patience and care.

Over medium heat, in a pan of some sort, melt the butter. Then, add as much flour. They say to use equal portions, by weight, of butter and flour. Actually, it doesn’t have to be butter; it can be any kind of fat or oil. And you don’t have to measure precisely — I never do, even when you’re meant to, which is among the primary reasons I’m not a chemist, a baker, or a crystal meth maker (isn’t that a nursery rhyme? Should be.)

Your task now is to keep the substance moving. I prefer to use a whisk. You can use a fork. Or whatever you like really (though I don’t recommend fingers). Just keep the stuff moving.

At first, it will be clumpy. After about ten minutes — yes, be patient — the mixture will really loosen up and turn liquid. At this point, watch closely for the colour to change. When it’s a pale-peanut-butter colour, it’s done.

What do you do with this substance, you ask? Good question. 1) Don’t eat it. 2) Use it to thicken things, especially soups, gravies, and cheese sauce. Generally, when you need something thickened, use roux. It’s smooth, toasty, and damned effective — three adjectives you’d love to see on any epitaph.

“Here lies Brian. He was smooth, toasty, and damned effective.”

Beautiful, isn’t it. See the roux. Live the roux. Unlock the good life.