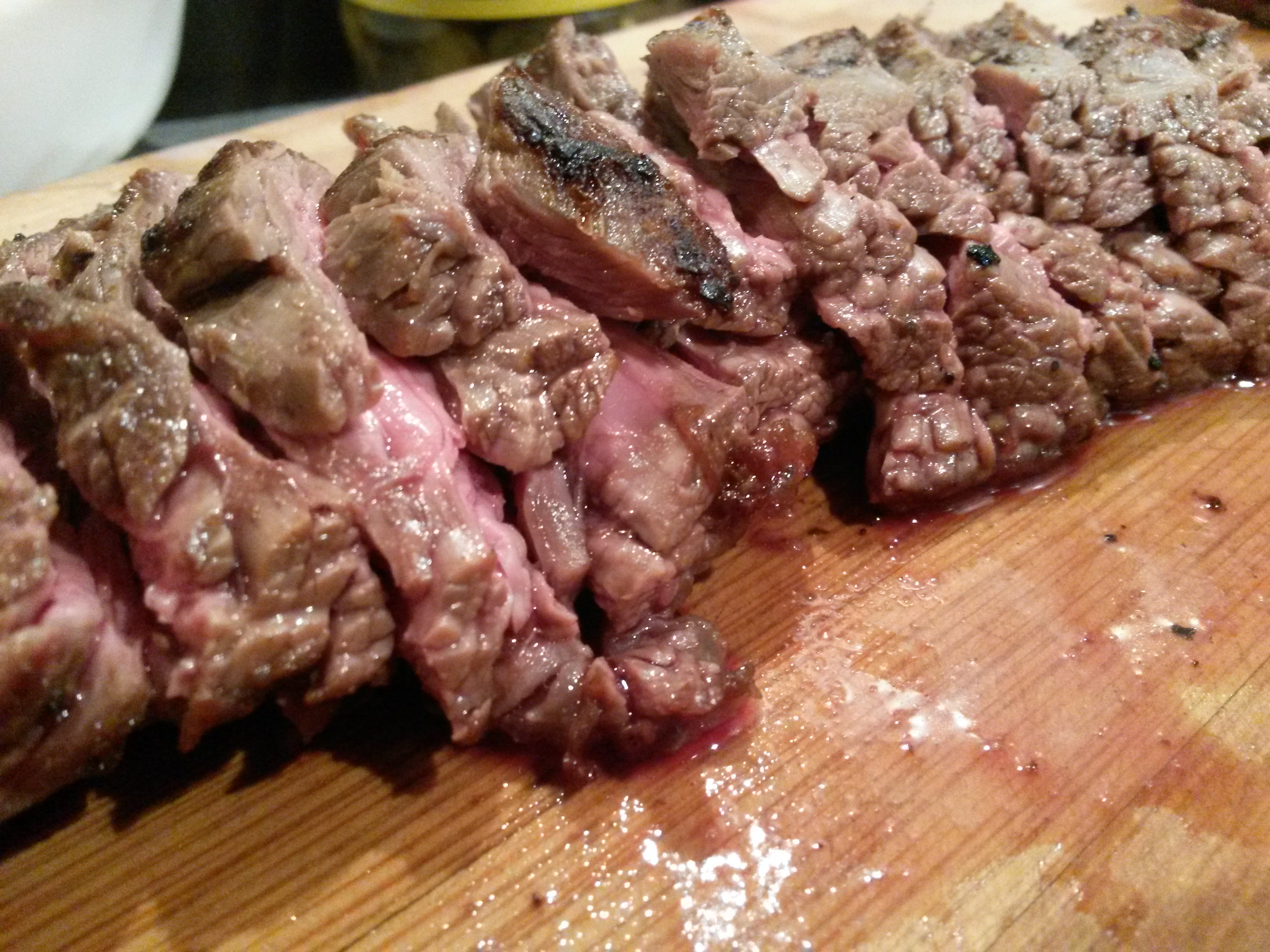 In Southern California, at the carnicería you can buy pre-marinated carne asada, and it’s often skirt steak. It’s cheap. It’s delicious. And our local carnicería was typically alit with flies and a few funky wafts from out the back, which means the goods were treated like meat, and not some kind of sterile, operating-theatre-prepped, plastic-super-packaged organic plough horse. It was meat. Goddamned good meat.

Skip forward to New Zealand and I soon learned that there’s a different butcher book that uses different names from the North American book. Lucky us, the skirt is treated much the same in both books — though there are other cuts that will do the trick for this recipe, including rump and topside. Let the lowest cost guide you.

Let me emphasise, this is cheap stuff. And it’s cheap stuff largely because so remarkably few people use cast iron and sharp knives.

The secret to cheap steak is in the preparation, the searing, the resting, and some well-placed strokes of a blade at the end of it all.

First, get the steak. Got it? Great.

Now, violate all health and safety codes by leaving the steak out in the big scary world for a few hours. Here’s what I do (as derived from an excellent chapter on Meat in J. Kenji Lopez-Alt’s The Food Lab): On a cooking sheet, sprinkle some salt — seasoned or whatever — and some pepper. Lay the cow slab on the sheet and rub it around a bit. Then, sprinkle further salty seasonings across the top. If it’s summer and you’re pestered by swarms of flies, a sheet of baking paper over the top keeps them out.

Here’s what happens as the meat sits:

Importantly, warm meat cooks more evenly, and it doesn’t severely affect the temperature of the pan when you put it in.

Let the steak go for three or four hours. If it’s down to room temperature, all the better. In the meantime, consider the appropriate beverage choice. (Recently I stumbled across Buffalo Trace bourbon, which I reckon enhances the taste of all food, along with the humour of all jokes, the adorableness of all puppies, and the general fecundity of all conversations. Highly recommended in this instance.)

Note: if you buy skirt steak at my local butcher (who wields knives with respectable still and gusto, I dare say), there will be a little sticker on it that says “slow cook”. That, my friend, is bullshit. Do not destroy the greatness of this beautifully cheap meat in a slow cooker; to do so will wreck the strong and gorgeous flavour of the meat.

Here’s the thing about cheap meat: it has flavour. Expensive stuff, like the eye fillet / filet mignon (depending on the butcher book you’re following), have very little taste. They’re tender no matter how stupidly you cut them at the end of it all, but they need help from a glace or sauce of some sort. (Expensive restaurants regularly push their expensive meats coupled with fancy cherry burgundy reductions or whatnot. This is the reason. Avoid this. Get a fucking rump steak, cut it right, and enjoy the taste of pure, unadulterated cow. Mmm(oo).)

Heat up some butter in your cast iron skillet until it smokes.

Lay the warm, salted steak in the skillet.

When you see the meat changing colour along the sides, flip it. Now, here’s a contentious point: you can flip it as often as you like. Kenji Lopez-Alt did the research for us, and it turns out you lose nothing with extra flips. Leave single flip pedantry for wanking data haters and their eye fillet nonsense. It’s all balderdash, poppycock, and twaddle.

It will take practice with your setup to know when the meat is cooked to your preference. The featured picture here is after about five minutes of cooking — then another five to ten minutes of resting.

DO NOT SKIP THIS STEP. Let the steak rest. You can let it rest in the skillet, but be aware that it will continue to cook in there. (I’ve been having good luck with this technique lately by slightly under-cooking before shutting off the flame.) By letting the steak rest, the juices redistribute themselves evenly back into the steak. When you cut into it, then, it doesn’t leak out all the goodness. Aim for this.

Now, like wood, steak has grain. You want to cut the meat into strips ACROSS the grain. If you cut with the grain, it will end up stringy and inedible. If you cut perpendicular to the grain, it will literally fall apart in your mouth. Note also in the featured image how little juice has leaked out of the steak after I cut it, because: RESTING!

There you have it. Keep it cheap and get some rest. You’ve earned it.