We were chopping firewood, sharing a bottle of stout, and talking about this whole cookbook idea when my friend Julian said “hey, have you read Pomiane?” I hadn’t. So Jules lent me this book and let me tell you, it’s a treat.

Written in 1948, it’s full of words and drawings — not photographs — and so the writing is as vivid as it is stark, and what would you expect from post-war France? It’s also funny. This book is, essentially, an extremely compact and effective version of what I plan to write here — which is to say that you can probably stop reading my ramblings, pick up Pomiane’s book, and abandon the hopelessness of my B-list cooking techniques.

Choose your level of involvement. I won’t be offended.

Pomiane’s onion soup recipe caught my eye because I both have and like onions. He suggests serving a scoop over a slice of bread, and I happened to have an artisan loaf kicking around. Win win on the ingredient list.

You’ll see immediately why I like his recipes so much; what I write here will be a long paraphrase of his impeccably honed hundred word version.

First, heat up some butter in a skillet until it smokes. (Sound familiar?)

While it heats, chop an onion. For mine, I decided to dice an entire medium-sized onion. This seemed a bit much later, so next time I’ll try a half onion cut into strips.

When the butter smokes, add the onion. Let it brown for a few minutes.

Add a tablespoon of flour. (Roux anyone?)

Stir that around for a minute, then begin adding a bit less than a pint of water. Measure this based upon your experience with beer, obviously. Keep the mixture moving.

After you’ve added the water, transfer to a sauce pan and boil for a few minutes. Add salt and pepper to taste.

That’s it. Done (though I bet a few strips of bacon wouldn’t ruin it!). I served it with a floured and pan fried tarakihi — otherwise known as the jackass morwong, I just learned — and they paired delightfully. (Why on Earth would anyone liken a fish to a jackass, which doesn’t. even. breathe. underwater. Ridiculous I say.)

Reluctantly, I’ll add the one picture I took of the boiling soup. It’s a horrible photo, to be honest; it does absolutely no justice to the flavour, texture, or simplicity of the dish. Are you ready for this dreadful photograph? Here, let’s get it over with: 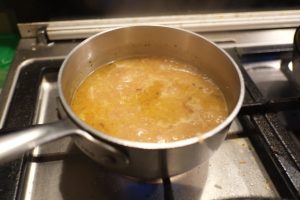 Ugh. It’s awful isn’t it? In any case, this at least documents the fact that I do have cookery equipment other than cast iron skillets. Shocking as that might sound.

In hindsight, I should have taken a picture of the soup poured over the bread, because it looked precisely like an onion splat, which is precisely why we’ve decided to title this recipe as we did. And when I say “we”, I mean Tanya, who said why don’t you call this “onion splat”. That’s all she needed to say for me to grasp the importance and necessity of doing a quick write-up.

Why, you might be asking, continue calling this “onion splat” if you have no documented evidence of said splat? Well let’s remember that Pomiane has no pictures in his book — only drawings, so this is in keeping with the spirit of the original.

In the spirit of the internet, I shall leave you with an ASCII drawing of the final product. Let us call this the ASCII splat of onion splat soup on bread: