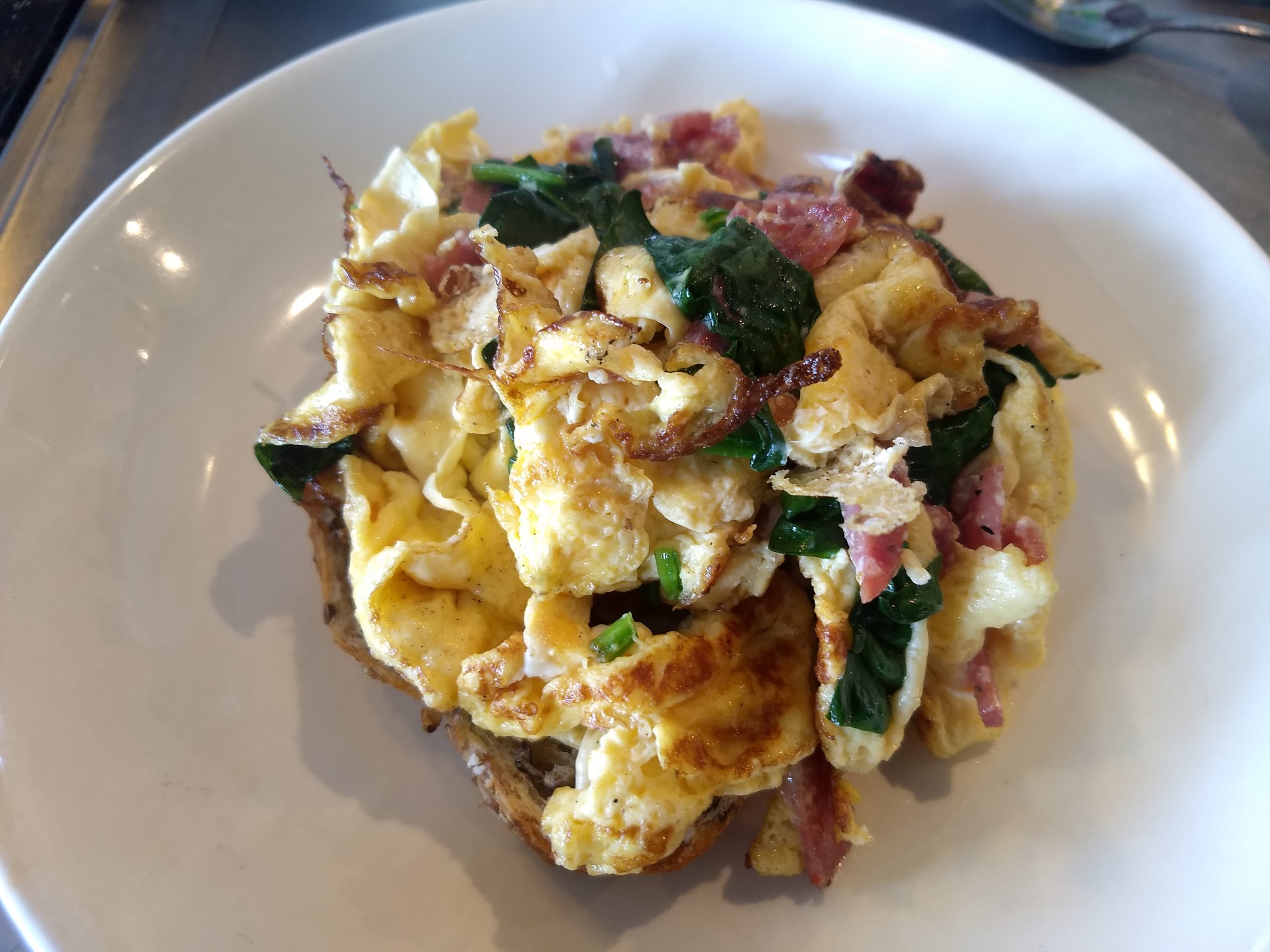 While researching eggs on toast, I discovered that some people COOK EGGS IN THE MICROWAVE. Obviously this troubled me, so I used a widely popular search engine to research whether it is, in fact, ILLEGAL to cook eggs in a microwave. I’m happy to report that it is, in fact, illegal. I’ll cop the heat for this search in my history so you don’t have to. Just trust me. Totally illegal. Don’t do it. Microwaves are FALSE.

You’ve probably guessed that I don’t own a microwave. I have never, personally, owned a microwave, though I’ve lived among them. They are noisy, ineffective, and energy inefficient; they are, in short, the leaf blowers of kitchen appliances. They should all be thwacked relentlessly with rakes and brooms, which are precisely the correct tools to use for assembling leaves into a pile — not a fucking leaf blower. But I digress.

Now, let’s say you’re locked down in a small flat with two children during a pandemic. No reason in particular. Let’s just imagine such a scenario [twitches anxiously]. You need comfort food. And comfort bourbon. But let’s focus on the food in this post, shall we? Great.

Your pile of ingredients should look something like this:

This is pretty simple (simple enough that I’m not even certain why anyone needs a recipe, given how much information the name of the dish conveys. Perhaps the only information needed is that one cooks the eggs in a pan before placing them over the toast. To be honest, I’m losing my faith in this recipe; let’s see how this progresses….)

First, butter the bread and toast it. In my case, I melted the butter in a hot cast iron skillet (of course), like this:

Because this technique never actually manages to make toast, I put the bread in the oven, partly because the oven is directly under the stove and I was already standing right there. Lazy bastard. (In case you’re wondering about my feelings toward another common kitchen appliance, namely the toaster, I’m comfortable with it. I have one. It’s a middle-range toaster, and surprisingly consistent in the results it pops out. But the toaster was waaaaaay over there at the time.)

(Aside: every time the toaster pops, Raymond, currently nearly four years old, cackles with delight and declares that the “funny totes” is ready. Isn’t that cute? (Don’t be fooled. He’s probably overturning a box of dirt on a carpet somewhere or dumping an expensive bottle of liquor down the toilet as we speak; so much for the comfort bourbon. This is roughly all he otherwise does; he’s a very tiny, very cute wrecking crew. Who won’t eat eggs.))

For fun, I took a picture of the lonely toast in the giant oven (well, it’s not quite toast yet; I believe in this picture it’s still just Modest Bread, which should be the name of a bread brand that isn’t particularly pompous, like Luxury Super-yacht Gluten Free Bread. Nor is it particularly shit, like Assistant Bank Manager Bread [shudder]. It’s just good old Modest Bread that you can count on):

(Holy mother of….! That oven is filthy. Better call a professional oven cleaner. (I just learned this past week that such a thing exists. On a popular social media platform, a member of a group of friendly and optimistic locals inquired for a reference to a reliable professional oven cleaner. A what? Yep. A THAT. That’s a thing. What kind of criminal record do you have to have to end up at THAT dead end? (Apologies to any upstanding professional oven cleaners out there. But how is this a thing?? Who would let a balding white dude with a paunch and a spray bottle of degreaser through their front door, let alone into the sanctity of their kitchen, even if the guy did profess to possess esoteric knowledge of how to release aerosolized oils from metal surfaces? Oh my god I just described myself. Whatever happens, I recommend against letting me clean your oven; I’ll probably disassemble it first and give up half way through. Typical me.)))

With that underway, it was time to SCRAMBLE the eggs. In my case, I used a fork. To achieve this: crack two eggs into a bowl and add a splurt of milk. How much is a splurt? This much:

Then stir vigorously with a fork. You’ll know you’re done when the eggs are all yellow. (Good luck getting that tune out of your head. Hah!)

Next, heat up that skillet and pour some butter in it (“In the name of love!” Sing it with me! “C’mon fire me up!”) (Look how quickly I was able to jettison that other crap song from your head. Yeah, I’m a professional writer. I’m hot. Sticky sweet.):

Pour in a parachute of scrambled egg:

Then whatever stuff you want in the eggs:

Now here’s the thing. As we said at the head: this ain’t no omelet. Or more precisely, this is an omelet for those of us who don’t give a shit. About what? We’re locked down in a pandemic my friends, with two children: we have no shits left to give, as the man says, or as the kids say when they crap on the floor next to the toilet. (This isn’t entirely true; they crap in the toilet fairly successfully. Peeing, however, is a different kettle of fish. They seem utterly unable to pee in the toilet, preferring, inexplicably, to pee on the toilet. The place stinks like a gas station bathroom full of incontinent squatters. Anyway:) Get in there with your spatula (or whatever you call your flipper) and fold or stir the mass of stuff around for roughly a half a minute until it looks like this:

Do you like salt and pepper? Great. Then shake your thang; do what you wanna do. Yep, add any flavour you want. Go ahead; you have my permission. It’s your lunch. Then put the toast on a plate and the eggs ON the toast (see how vivid the name of this dish really is) to make it look a little something like this:

Seriously, that’s all there is. It’s over.

No more recipe here. Go on. Eat your eggs.