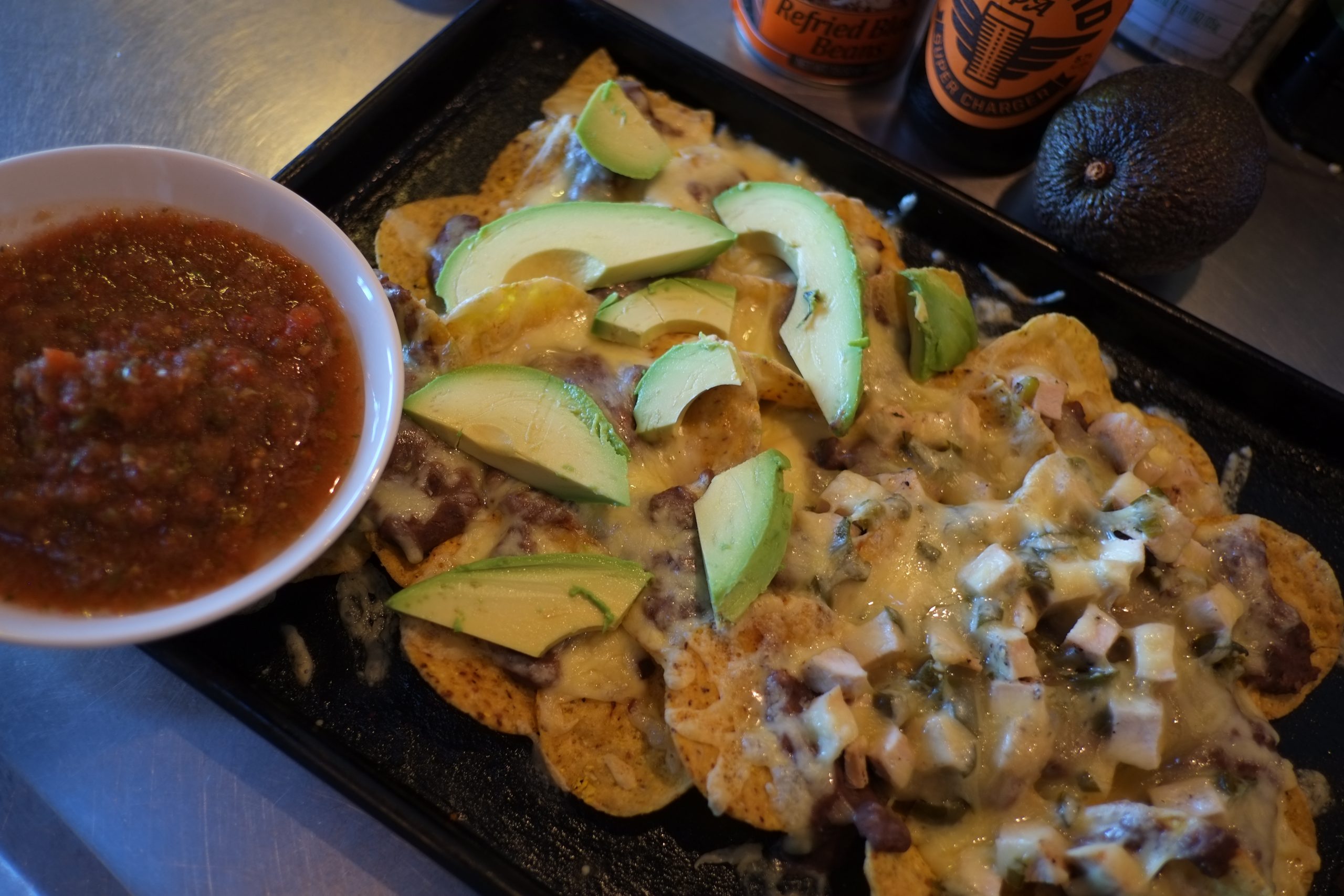 I don’t mean to overstate things, but mine are absolutely the best nachos in the galaxy. Word is there’s some good Mexican food out past Betelgeuse (assuming the red giant’s even still there, given all the hooha about gravitational waves and supernova these days. Surely you’ve been keeping up with the Galaxy Gossip. Anyway) herein please find my recipe for the slimming, trimming light snack we call nachos, complete with a clear answer to the burning question ‘Why are nachos good for you?’ (Including plenty of parenthetical puns and unnecessarily absurd commentary.)

You’re probably asking yourself, ‘Who is this guy to claim he makes the best nachos on Earth?’ Well I’ll tell you exactly who I am.

In addition to being a fully-qualified, professional Brian, I’ve both eaten and made lots of nachos. And I lived a long time in Southern California, so there.

(I notice that I said ‘made lots of nachos’ instead of ‘cooked lots of nachos’. Interesting isn’t it. You don’t bake nachos. Or fry them. Or blanche them. Or poach them. There’s no particular heating technique embedded in the verb we use to describe the process of transforming a pile of corn chips into a gooey cheesy pile of paradise. ‘Make’. Humph. I think nachos deserve better. From now on, I’m going to ‘fricassee’ nachos. I don’t know what ‘fricassee’ means, so I’m not worried. Does anyone really know what fricasseeing is? I thought not. Henceforth, to ‘fricassee’ is to expertly prepare nachos. Anyone here a wikipedia editor?)

Back to the recipe. You’re definitely going to need salsa, and I can, in good conscience, only recommend one. You know the one.

I should mention that Tanya called this dish ‘His and Hers Nachos’ because it’s so easy to make one side vegetarian and one side wholly edible, thereby satisfying both of us. It’s an excellent observation, and a good guide for thinking about your nacho layout.

Speaking of your layout, don’t just dump chips on a tray. Why? Well I’ll tell you my thoughts, then you tell me yours (though I won’t be able to hear you). My main thought is that if you simply dump the chips, then the chips at the very bottom will be just plain old chips. Ugh, how bland. On the other hand, if you arrange the chips, then you can ensure that EVERY CHIP gets some topping. To me, this makes a big difference in the nacho-eating experience: there’s no pressure to dig around and find a perfect chip with stuff on it. Each part of the nachos — each nacho — is a perfect expression of the whole of the nachos. There ought to be a word for such beauty (there is, but I can’t think of it; it’s not synechdoche, but I wish it were because that’s such a lovely word. Alas.)

My goal here is to make some portion of each chip visible. So I insist on overlapping them rather particularly (I’m fun to live with!) Next, you’ll dump some refried beans on.

About the refried beans: you might need to add water to the can of beans, or if you’re making your own, make them a tad runny so that they can drip on to the chips. But, and this is very important, don’t make them so runny that they make the chips moist.

Brief aside: part of what makes my nachos so incredibly good is that they remain crispy. We learned that you can’t put salsa directly on the chips or they get terribly damp. I also know for a fact that if you use chilli on nachos, they’ll get soggy. I know this becuase I actually do this — or used to do this until I discovered that it’s so much easier and better to keep the chips crisp (that ought to be a bumper sticker: ‘Keep Your Chips Crisp’. Wouldn’t that look classy right next to your ‘Honk if You’re Horny’ and your ‘Whoever Dies With the Most Toys Wins’. Speaking of this latter bumper sticker, one time toward the end of a long road trip, when we all get a little punchy in the car, we saw one of these bumper stickers. It was on some stupidly oversized sport utility vehicle towing something useless like a jet ski or whatever. I said to Tanya: you know, the problem with that bumper sticker is that it doesn’t specify what you win. What if what you win is shitty? What if whoever dies with the most toys wins a giant bag of dicks. And now you’re dead and you have to carry around a giant bag of dicks for all eternity. What kind of winning is that? You don’t even get to pick out which dicks go in the bag! They could be really shitty dicks (also literally depending on where you live (or die)), and then what. Then your afterlife includes a sack of shitty dicks just because you collected stupid jet skis and SUVs. No thank you ma’am! We went home and jettisoned several toys just in case.)

((My friend Conor believes I’ve made an error here: he wisely points out that I’ve conflated winning and prize giving, which are clearly not the same thing. Clearly. Let this double parenthetical remark stand eternally as acknowledgement that Conor, on at least one occasion, has corrected one of my jokes. (The cool thing is that Conor manages to make jokes out of joke corrections (in real life that is; not here because I’m in control of the conversational flow, muahahaha), and despite this charming character feature, he’s hugely fun at parties. Downright magical!)))

Back to the nachos again. I assume you realised that you’d need to heat up the beans. Like this:

They’re still pretty gloppy in that picture. By the time they were sufficiently heated, they were smooth and ploppable. In fact, here’s the next step:

No, it’s not an exact science. But there’s a plop on exactly every chip. (‘Plop’ is a technical culinary term. You heard it here first!)

Next, I had diced up the chicken and some jalapenos. Check this out:

Sprinkle that stuff on the proto-nachos:

And then sprinkle shredded cheese atop this pile of healthy living:

The final step is to FRICASSEE the nachos in the oven on fan grill. I don’t preheat the oven — which is how I proceed whenever I fricassee; I set the temperature to 200 and slide the tray somewhere in the middle of the oven and give it a few minutes. Warning: it doesn’t take long! Be careful, because fricasseeing at this pace can easily burn the edges of the exposed chips. Obviously that’s bad. So bad that you’ll have to eat the whole tray alone and start over for your guests (so not really that bad.)

Here’s how it looks all melty and amazing, with some sliced avocado on Hers side:

Obviously, as you eat the nachos, scoop some salsa on each chip. Or, you can drizzle some salsa across the top. Whatever suits.

I promised a few words on ‘Why are nachos good for you?’ I can give you some evidence that they’re in fact healthy: my kids won’t eat them.

Now, any philosopher worth a whit will tell you that’s not a valid argument. But fuck them. Do you want to be correct or do you want to enjoy nachos? That’s what I thought.

The Philosophers might also wank on about false beliefs and justification, but all of this is irrelevant. Because, as we all know, whoever dies having eaten the most nachos wins. Y’all better get to fricasseeing some serious nachos quick, because after this summer, I’ve got a hell of a head start.

(Not 100% sure what you win in the death-by-nachos competition, but the bag of dicks is already spoken for, so….)