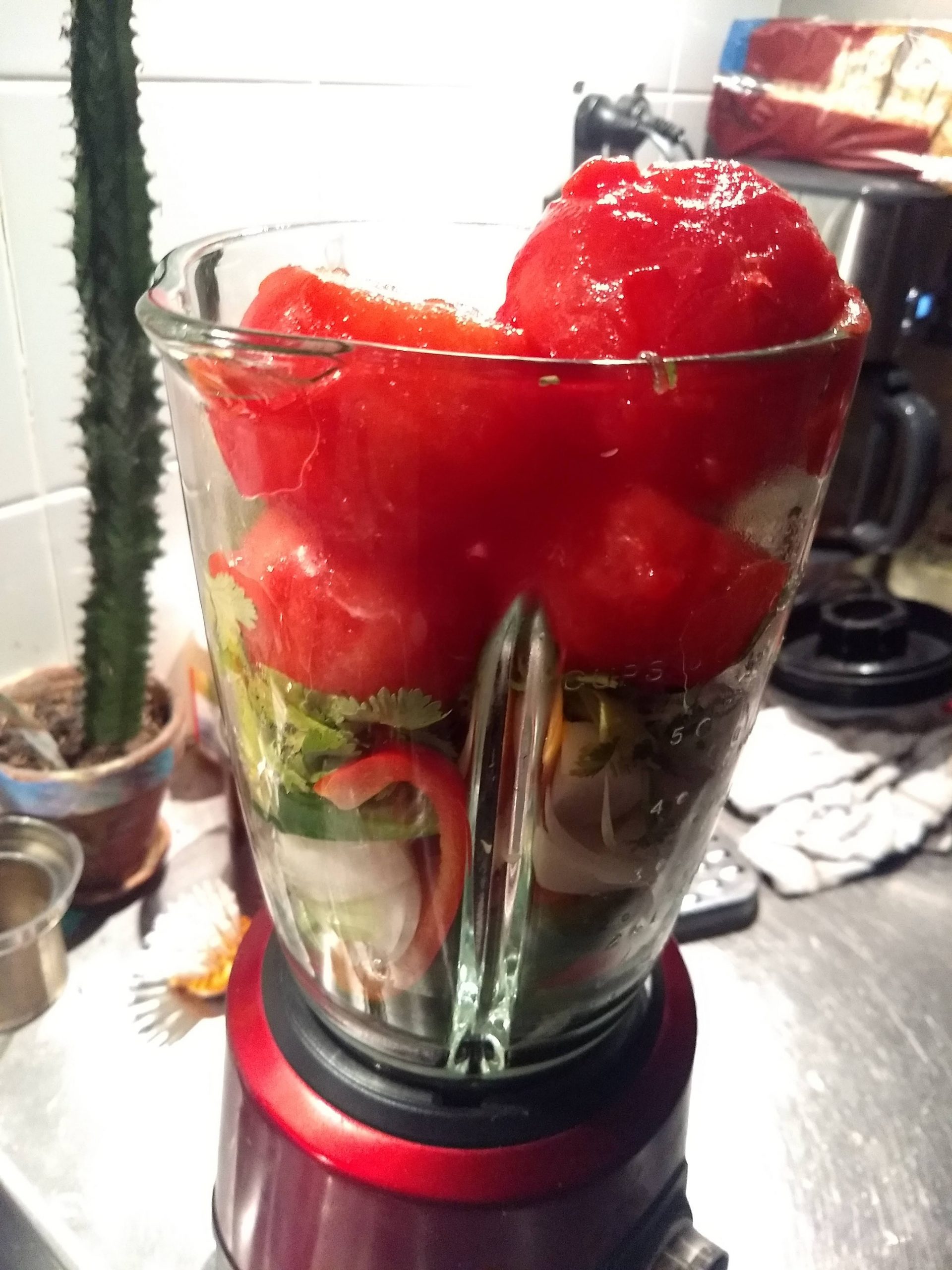 I don’t mean to overstate things, but mine is the best salsa this side of Betelgeuse. And yes I do mean the star that’s about to supernova any minute. This is a fact: my salsa is so good, it makes stars explode. That’s right. I’m taking credit for the destruction of a red supergiant because of a blended tomato and pepper sauce. Why not?

Anyway, in Spanish, “salsa” simply means “sauce”. But here in the English-speaking world, when we say “salsa” we usually mean a spicy tomato-based chilli sauce that makes Mexican cuisine the world’s best cuisine on Earth.

Salsa comes in many textures, colours, and degrees of heat. A jar of Old El Paso, for example, tends to be an overly-sweet, chunky tomato, chunky pepper stew, utterly insipid in its flavourings, utterly bereft of onion. Here, we’re not aiming for such a mess. Instead, this is a blended salsa. You’ll find this variety in real Mexican restaurants — and by real I mean ones in the greater Los Angeles area, because that’s what I’m familiar with and therefore that’s the only variety worth talking about.

Here’s what’s so beautiful about this recipe: it’s simple. By now you know me (hi, I’m Brian), and you know it’s all about technique and not overloading your dishes with bullshit (not literally, but also literally).

To start, get some water boiling. While it starts boiling, slice the tops off the tomatoes, lay them flat, and cut a shallow X across the back. This idea is that you’ll blanche the tomatoes, which is to scald them in boiling water in order to get the skins off. The X at the bottom will make it super easy to peel off the blanched skin. Here. It’ll look like this:

You probably asked yourself, “how many tomatoes”? Well there’s your answer.

Pluck them from the water after about thirty seconds. The idea is not to cook any of the tomato flesh; the idea is to loosen the skin. They’ll look a little something like this:

Peel the skins and dump them in the blender.

Do the same with the onion. (I don’t mean to take the seeds out of the onion. There aren’t any seeds in there. If you go looking for seeds inside an onion, you’ll be sorely disappointed. In fact, at the centre of an onion is — dun dun dunnnnnh — nothing.)

Can you use hotter peppers? Of course. I have delicate children at home and they don’t know the joys of excruciatingly searing heat in their mouths. They’ll learn eventually. For your part — obviously — use what you like. It’s Spanish for “sauce” for chrissake! Put whatever you want in there.

Anyway, at this point, you’ve got something like this going on (background cactus optional):

Oh yeah, I added the cilantro too. How much? Well, how much do you like the taste of cilantro? Same with the onion. For this batch, I used one medium onion — and that’ll provide some serious onion taste, but I like onion taste. And I used half a bunch of cilantro that I picked up at New World. (What’s New World, you ask? It’s a New Zealand-owned supermarket chain. I’m not saying that you, fair reader, need to visit New Zealand just to procure a bunch cilantro (though they’ll call it coriander — Queen’s English and all), but it’s worth a visit to New Zealand (if you’re not already here) in general, even though the salsa here is shit, except for mine, which is mind-bogglingly good, as I’ve said. Keep your eye on Betelgeuse!)

Now, notice how tall this stack of ingredients is. When you turn on the blender — WAIT! We’re not ready yet! — you’ll need to press the stuff down into the blades. This is incredibly dangerous.

Before you do this horrifically, potentially dismembering blending, add your seasonings. For this batch, I added a bit of some random “Mexican Seasoning” (from New World, duh), and a healthy smattering of Lawry’s garlic salt (straight outta Los Angeles!), and a few twists of fresh ground pepper. How much? This much:

Now, grab a potato masher or something like it. Turn on the blender and give the ingredients a gentle push. Now look, I’m not taking responsibility for the safety of your fingers here. You know roughly where the blades are at the bottom of that death vessel. You know roughly how long your fingers are. Steer clear. But you have to get the tomatoes ka-jiggled up enough to get the whole mess blending. Use your best judgement. If you lack best judgement, then use someone else’s.

And that’s it. You’re done. It should look absolutely identical to the featured picture here, unless you stuffed it up somehow, which is difficult to imagine given how incredibly simple it really is. (Except for that part where you potentially lost a digit.)

Enjoy this blended salsa as a dip for corn chips. Put it in a taco. You can even pretend it’s soup, like our little boy Raymond does — god he’s weird.