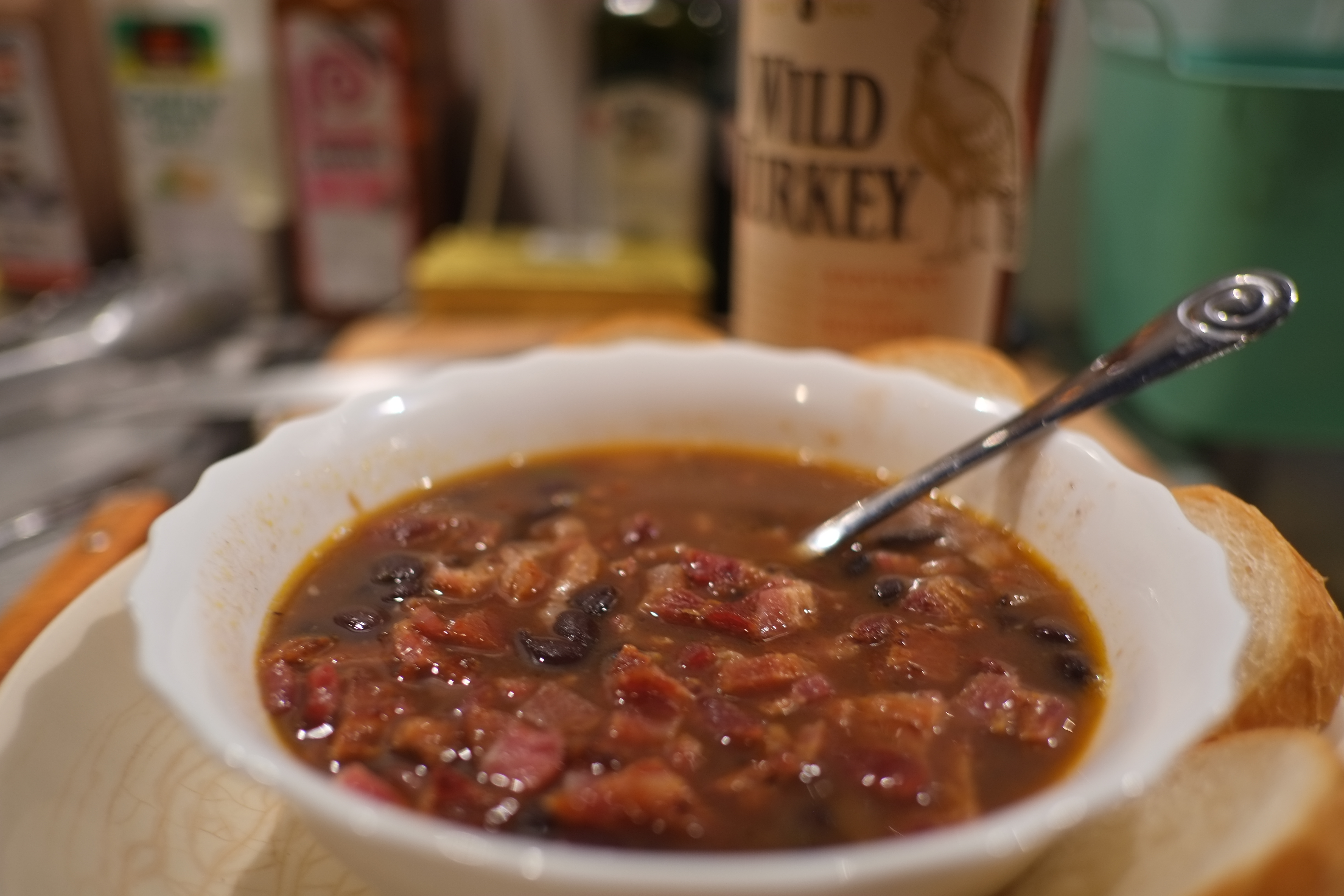 When I was a kid, the only soup I’d eat was Campbell’s Bean with Bacon. According to the official nutritional information, a half cup serving of this substance contains 36% of the recommended daily sodium intake, based on a 2000 calorie diet. The official ingredient list includes the following horrific parenthetical clarification: “BACON (CURED WITH WATER, SALT, SUGAR, SODIUM PHOSPHATE, SODIUM ERYTHORBATE, SODIUM NITRITE)”.

From these facts we learn that my chosen childhood soup diet was notably non-nutritious. Survival was never guaranteed; scurvy was likely. Furthermore, that I developed a shred of interest in vaguely healthy cooking — let alone savoury stuff worth cataloguing — is nothing short of a suspension of the laws of nature by the hand of God. Yes, a miracle.

Recently we learned that dried black beans retain better flavour when not soaked prior to simmering. So we did that yesterday, and what they say is true. I promised I’d make a vegetable stock and some soup, but typical me, I forgot to make stock until an hour before dinner time. Plus I forgot to even think about what else to put in the black bean soup. So the pressure was on.

Good news for you: we’ve developed a quick recipe, assuming your black beans are ready to go, as ours were. Here’s the ingredient list:

If you’re making your own stock, then start clearing out the vegetable dregs — the hopelessly wilted and spurned whom you’ve not yet cast to the worm bin. Chop that stuff up a bit, put it in a pot of water, and boil it with salt and pepper. Put a lid on it to speed things up.

In my case, I found a leek that looked like it was about to faint, so I chopped it out of its misery. There was some vaguely useful cabbage in the crisper drawer, so I cut its heart out, dissected the heart carefully, and dumped it into the boiling pot. I assured myself that the remaining cabbage will turn up in something and returned it to safety. We’ll see.

While that was going, I pan fried some hoki for the kids. They’re not like me; they don’t eat bean with bacon soup. This, combined with their occasional willingness to eat fruits and vegetables, means their chance of developing scurvy is significantly lower than mine. Good for them, I say. And more bacon for me.

Tanya wanted fish too — by the way her chances of suffering an easily-avoided nutritional deficiency are also quite low, given that she’s who the kids take after — so I fried her a tarakihi fillet. By the time all that was dusted (with flour!) and done, the stock smelled a delight. Back to the soup.

We stood there looking at the pot of beans. I looked at Tanya. She looked at me. We blinked slowly.

I was reminded of the first time your baby shits and you look at each other utterly confounded. What is this mucky goo? Where to turn? What to do?

Look, it’s just soup. It won’t crop up Freudian discontent and need ages of therapy if you shout or cry over it. So holler and wail as the spirit moves you. Follow your instincts and know that she’ll be right.

“What else goes in black bean soup?”. We let the some random web site guide our instincts, and here’s what worked out:

I suggest pairing this with a glass of Wild Turkey.

To keep it vegetarian — note that contrary to all reasonable indications, Wild Turkey is in fact vegetarian — I didn’t add the bacon to the soup. (Fry up the bacon first, of course.) It’s fine to top off with the bacon, as in the featured image. Or to keep the vegetarians satisfied(-ish), try avocado. Like this: 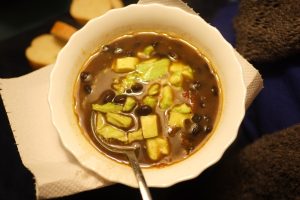 Anyway, there’s the simple answer. To black bean soup, add salsa and bacon. But by all means, make it good bacon. Make it good salsa. And leave the goddamned useless carrots and sodium to Campbell’s.