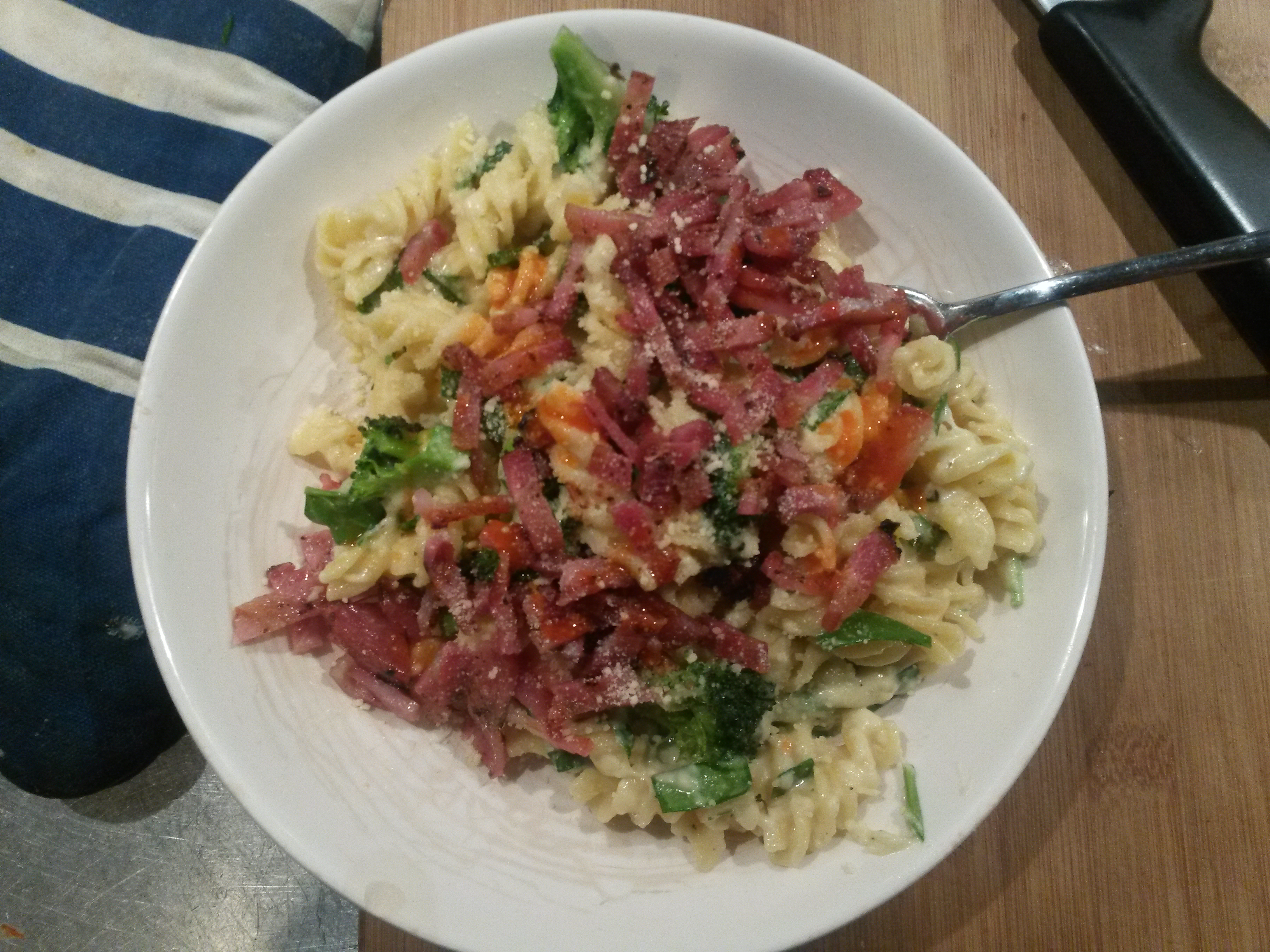 Soups use too much celery for my tastes, and by “too much” I mean the slightest shred of the shit. My opinion: like mayonnaise, the taste of celery overwhelms and utterly ruins everything. Plus it has a nasty texture. And a bunch of celery was mean to me once.

Here’s a bit of a twist on a classic minestrone soup, minus the goddamned celery of course.  And no carrots, because carrots surely take the prize for Most Disappointing Vegetable. Consider: the best way to spice up a carrot cake is to add chocolate and leave out the fucking carrots.

Anyway, we didn’t have most of the traditional ingredients on hand, but we do have a planter box full of fresh spices on the verandah, so it was there we drew our inspiration. That and the half-gone bottle of plain tomato sauce in the fridge — tomato sauce we had used to make pizza sauce with those same fresh spices.

But this raises a concern: what really separates a tomato-based soup from a  tomato-based sauce? Honestly, I think it’s mostly the vessel in which you dump the stuff that determines which category it fits. A bowl of Bloody Mary would be little more than tomato liquor soup and nobody has soup for breakfast.

(Side note: I’m fairly certain that some people either do have or would have soup for breakfast, depending on the weather and depending on what’s available, which also depends on employment status, which further might have, at some point, depended on how many bowls of Bloody Mary you had before that staff meeting last Monday morning. But I digress.)

Here’s the point — our minestrone soup contained this:

Yeah that’s right, a leek. You want to know why: because all I had was a leek and an old banana, and banana minestrone soup would kill a bear. Then you’re stuck with a dead bear, and seriously, who needs to shoulder that kind of burden in times like these?

Back to the pertinent point. First thing’s first: make a roux. To do this, heat up some butter over a medium to low flame, add a few tablespoons of flour, and whisk it. How much of each exactly: exactly as much as required to make a roux. This is to say: I don’t know. You just get used to it over time and after lots of mistakes. Like whiskey.

With roux, be patient. Keep it moving so nothing sticks, and keep the heat low enough that it doesn’t burn. Once it starts looking the colour of peanut butter, you’re in business.

Now, add the leek, chopped up a bit. I cut mine the long way, making two crescents. I put them flat side down on the cutting board and sliced them into curved strips. That’s what I dumped into the peanut butter coloured roux.

So when I say it’s a variation of minestrone, I mean it’s a minestrone that shares almost no common ingredients with traditional minestrone. It’s either over-simplified minestrone or over-complicated tomato soup. Whatever you call it, two days later, it’s still delicious, especially if you shake some parmesan cheese into it.

There you have it: no celery, no mayonnaise, and no carrots. Therefore, a completely edible soup with the added benefit of being incredibly simple and cheap to make, regardless of your opinions about the fibrous green devil stick that ruins every food it touches.

(Our featured image features the noodles that went into the soup, but with cheese and bacon instead. So it isn’t soup. It might even be the opposite of soup, if soup has an opposite. Does it? Probably not. Like squirrel. There is no opposite to squirrel. (Antonyms are weird come to think of it.) Anyway, I don’t have a picture of this particular soup, so now you have this picture. Lucky you!)