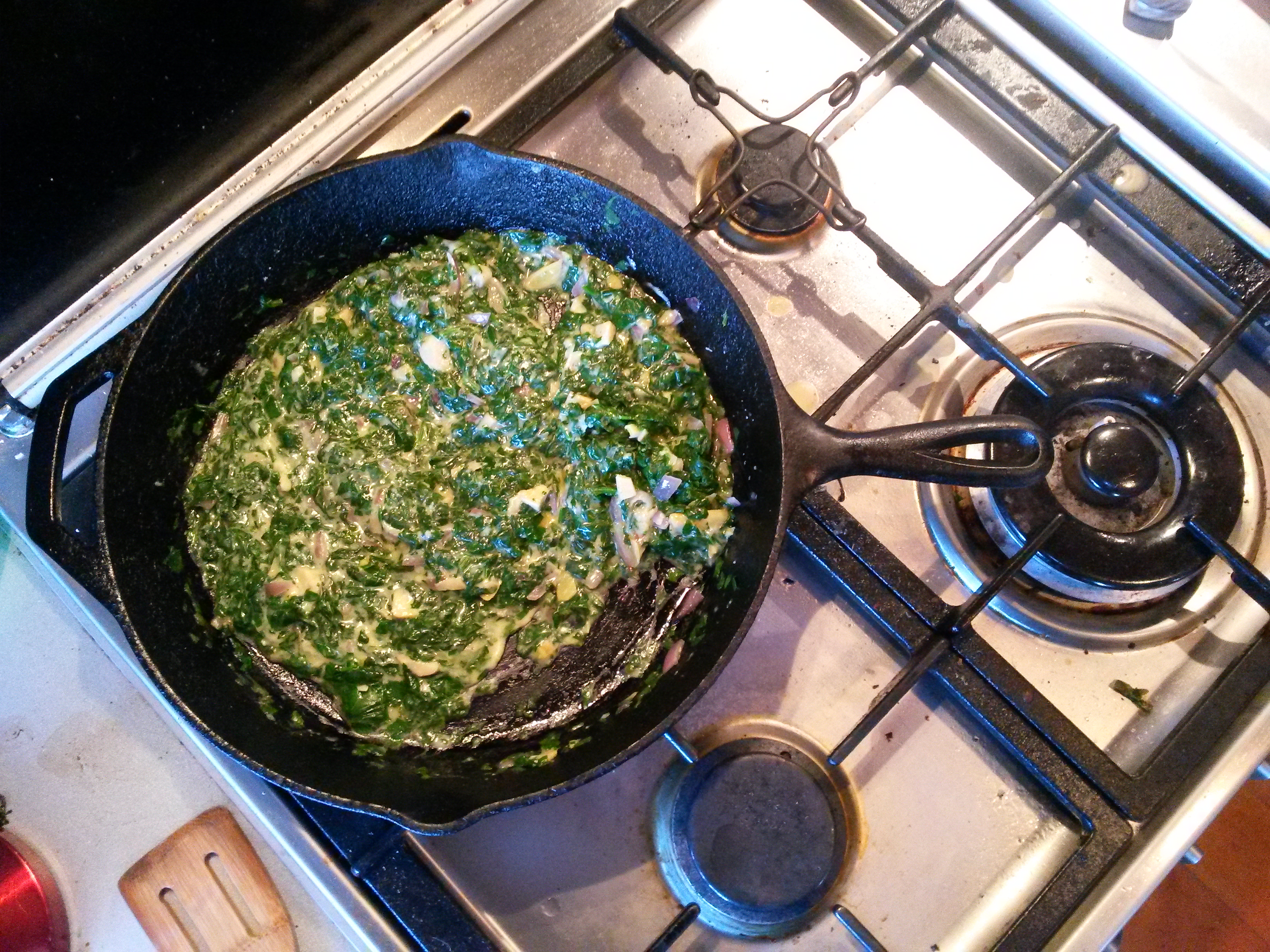 I’m not sure whether this is spinach dip or creamed spinach. To be honest, I don’t know what the difference is, and whatever it is, I don’t know that it particularly matters. Like so many foods, it’s what you do with it determines what it is (see previous comments on soups vs. sauces). If you put the stuff on something, then it’s creamed spinach; if you drag something through it, it’s spinach dip.

So let’s call this “Benevolent Spinach Dip”, because the whole idea was to drag things through the stuff, thereby coating the things with the stuff, then to eat the stuff-coated things.

I know what you’re saying: spinach isn’t food; spinach is what food eats. I totally get this sentiment. Vegetables are gross, especially when it’s basically just thick grass, which is clearly what spinach is. But over the years I have come around on spinach: Pigs, for example, convert spinach to bacon, and though obviously we all prefer spinach in its bacon form, this recipe is actually pretty delicious — and at the end, we’ll complete the circle of life by adding bacon to the whole mess.

Anyway, here’s a quick list of the ingredients you’ll need wrestle away from the local livestock:

First, boil some water (shit, that should be on the ingredient list, technically, so ** just added) and pour the boiled water over the spinach through a colander. I always thought this was what they called “wilting” but it isn’t, and wilting appears to be a far more technical and gentle process. So, let’s call this step something more distinctly accurate: “scalding”. To summarise this paragraph, the ever-barbaric Step One is to “scald the spinach”. (Things get more benevolent later, honest.)

Next, chop up your onion and your artichoke. If you’re using fresh artichoke, hello, and please enjoy what I like to call “doing it the hard way”. Violently steam and scald the fresh artichoke for several tortuous hours, then cut out its heart. (Decidedly non-benevolent.) Alternatively, purchase a (recyclable) jar of (non-genetically  modified, organic, sustainably-harvested) artichoke hearts, gently twist the jar open, and lovingly remove a few pieces of succulence. (Fun fact: artichokes are not succulents.) Now, mercilessly butcher these previously jarred artichoke hearts.

At this point, you should have some diced stuff and some brutally scalded spinach, which should have cooled slightly. Press some of the water out of the spinach and lacerate it horrifically. (That is, chop it.)

In a cast iron skillet, melt some butter and add your diced onion. When the onion has softened sufficiently (and you’ll know when that is because this will not be the first time you’ve eaten onion), add the artichoke and spinach.

Then, add the milk+arrowroot/cream fluid and stir. Add (garlic)salt+pepper to suit your tastes and stir the stuff around.

Add the cheese and let it all get gooey, and that’s the end.

Note: If you are not inclined to the egregious errors of vegetarian ways and you like making food more delicious, then add some chopped bacon. (As noted earlier, bacon is simply spinach converted, by a pig’s digestive system, to a more delicious form, so this is a wholly reasonable step to take.)

A note: last time I made this — the time that inspired this recipe — I used half a red onion, because we had that leftover from pizza night last week. I hadn’t used red onion in this recipe before because I generally avoid red onion, even though my wife loves red onion. I’ve now come to my senses, realising that an intact marriage should take priority over one’s preferred variety of allium cepa. It was Tanya who said of this instance of spinach stuff that it had a “benevolent flavour”, and she was correct. I think it was the red onion that set it apart, but please don’t tell her I’ve admitted this. I’d hate to have her think that my stubbornness might have had a poor impact on the quality of my cooking.

For the record, I ate mine with crackers and slices of a salami that was on special at the supermarket (and it’s my new favourite salami!) Here’s a quick shot of the final product.