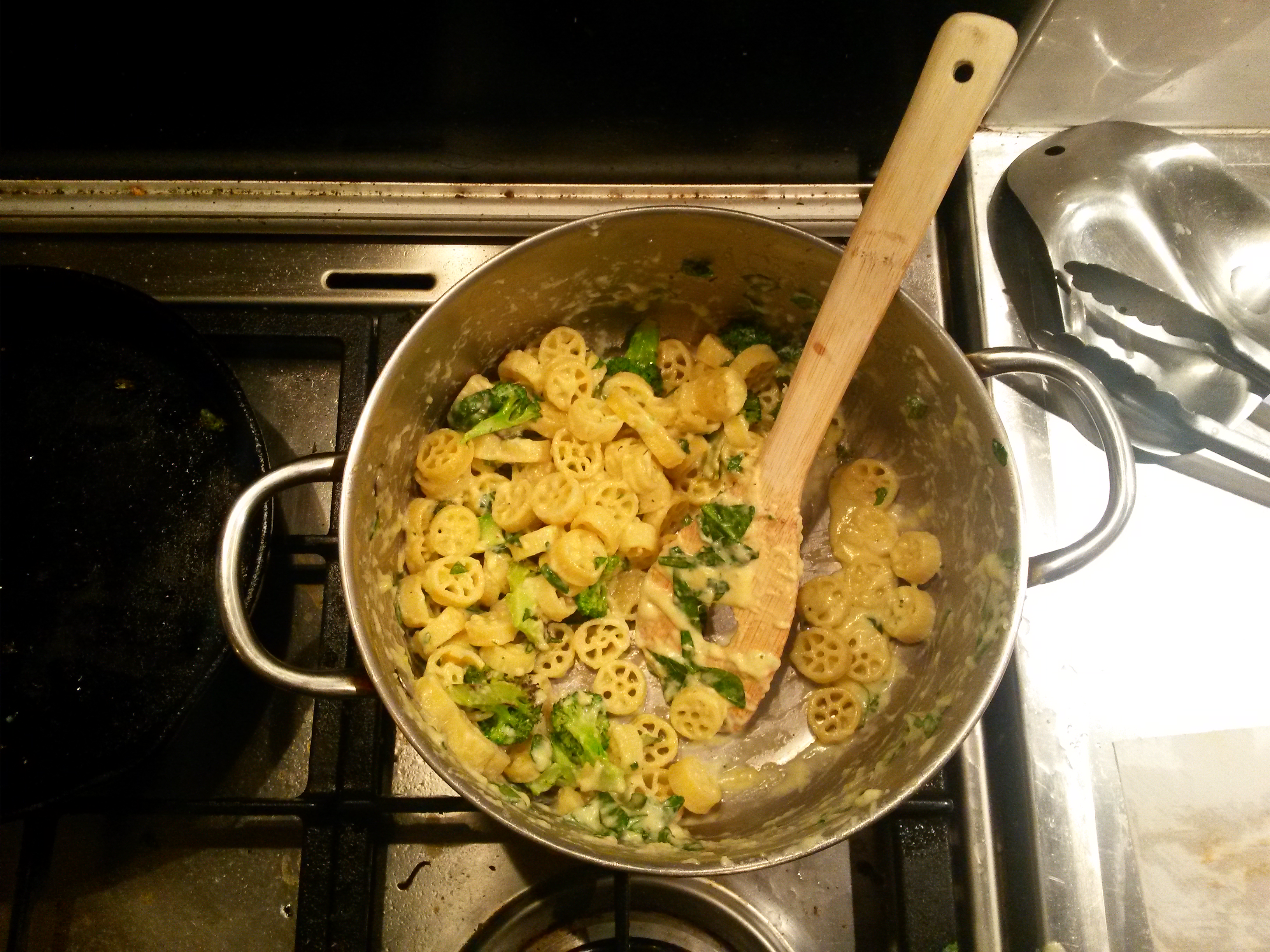 unless you’re my eight year old kid who wouldn’t touch the stuff with a borrowed hand. Charlie is what we non-judgementally call “fussy”, but in reality he’s the food-choice equivalent of a hangnail. Anyway.

Macaroni and cheese is one of those delightful dishes named after its main ingredients. But, don’t be fooled! You don’t need to use macaroni. And you might choose to jeuge up the fromage well beyond your stock standard processed American food clump.

First, when considering what kind of noodle to use, you can always simply go with what’s on hand. Or, if you have actually planned ahead (and by all means give yourself ten points if you have, and keep track of these points because in the end they matter!) then choose a noodle with a lot of surface area. The more surface area, the more cheese (substance) will attach to each bite. And the more cheese in each bite, the yummier — and the quicker the kids will fill up and you can get on with the joyous task of eating your own lonely bowl of cold mac and cheese amid a stack of crusty dishes. Welcome to parenting.

My noodle preference: those twisty twirly noodles whose name escapes me. You’ll know them when you see them.

And when considering cheese, you can go with a traditional colby or edam — or for our American readers, a block of plastic — but here we’ll be adding some secret ingredients that will set your classic noodle clump apart from all others.

I like to minimise the size of the dish pile, so I do things in the following order:

In this order, you can use one stock pot for the noodle boil and the cheese sauce, and one skillet for the broccoli and bacon. One-less-pot to clean can make or break an evening; trust me on this.

So first, boil some water, then add the noodles. Most noodles take eight to ten minutes; check the specific instructions which may vary slightly.

Now, heat up your cast iron skillet and sauté the broccoli. The way you chop the broccoli matters. You don’t want trees: you want half trees with one flat side. That flat side will fry against the cast iron. Briefly (in case you haven’t studied the technique):

Don’t ever steam broccoli to a boiled-worm texture; if you (mistakenly) think you prefer broccoli prepared this way, you might as well cut costs and throw in a few slices of discarded garden hose instead. Mmm. Hose.

By this point, the noodles should be boiled. Drain them in a colander.

Next, fry the bacon in the cast iron skillet (after removing the broccoli, right?), and while you fry the bacon, make a roux in the stock pot you used for the noodles.

The thing is, whenever I make anything that is meant to be thick, I make a roux. The key is to keep the stuff moving, and in this case, the stuff is butter and flour. Now, there are about eleventy hundredish roux recipes out there, and to each his own. I’m not about to tell anyone what they ought prefer (even though I’m writing a cookbook?). After a while you develop your own style, and that’s perfectly fine. My style is butter and flour, and I don’t measure — though they say to use equal portions, by weight, of flour and whatever fat you choose. Whatever. Ignore instructions (and embrace irony).

Over low to medium heat, melt the butter (fat), then add the flour. Keep the substance moving (by whisking) so it doesn’t burn, and don’t worry if it looks a bit sticky at first. After ten minutes or so — yes, be patient — the stuff will really loosen up and begin to brown. You want it about the same colour as peanut butter, and it’ll smell toasty.

I should have mentioned that you need to grate the cheese. If you’re following along without having read this whole narrative first, then now is the time to panic and scramble around to shred your carefully considered fromage while keeping the roux from burning to death. Sorry about that.

(I’ll see if I can get the editor to add a paragraph about the need to shred the cheese earlier in this piece, but to be honest, I don’t foresee it. I’m the editor and I don’t pay myself well enough to ghost-write for myself — plus ghost-writing is far outside my editorial scope. I might have to put out a request for proposal for an editor willing to contribute minor additions as necessa——)

With your roux all nice and peanut butter toasty, add your shredded cheese and some milk to keep the cheese from sticking to the pan. Whisk. Everything will start to melt together and start to look like a sauce. Yay! Cheese sauce!

If the sauce is a bit thick, add some milk. Keep doing this until it’s a consistency that looks right. You’ll know. If it gets too watery, you’re doomed and will have to start over, which would be tragic (O, the tragedy of the cheese that runneth!) given all the effort you’ve already expent. (“Expent” is a word. I’m sure of it.) Avoid this.

Add seasonings to taste, and, here’s the big thing that sets your cheese sauce apart from all others: a shot of bourbon.

Stir it all together, verify the consistency, and remove from the heat.

If your noodles have stuck to each other a bit, then loosen them up with hot water. Some claim that oil in the boil-water prevents this, but to be honest, I’ve never had luck with this technique. More importantly, only a self-righteous prat would ever complain about the consistency of cheese-covered noodles. They’re covered in cheese for chrissake! Enjoy them!

To finish it off, add the broccoli, some chopped spinach, and some chopped bacon. Stir it all around, gather the children, pour a personal bourbon, and enjoy a healthy helping of Kids Love Macaroni and Cheese.

(Note, the feature picture is from the last time I made M&C, and I used noodles that were on hand (for which I did not receive ten points). They were delightful. And I hadn’t added the bacon into the mix so to keep it vegetarian. Don’t ask.)