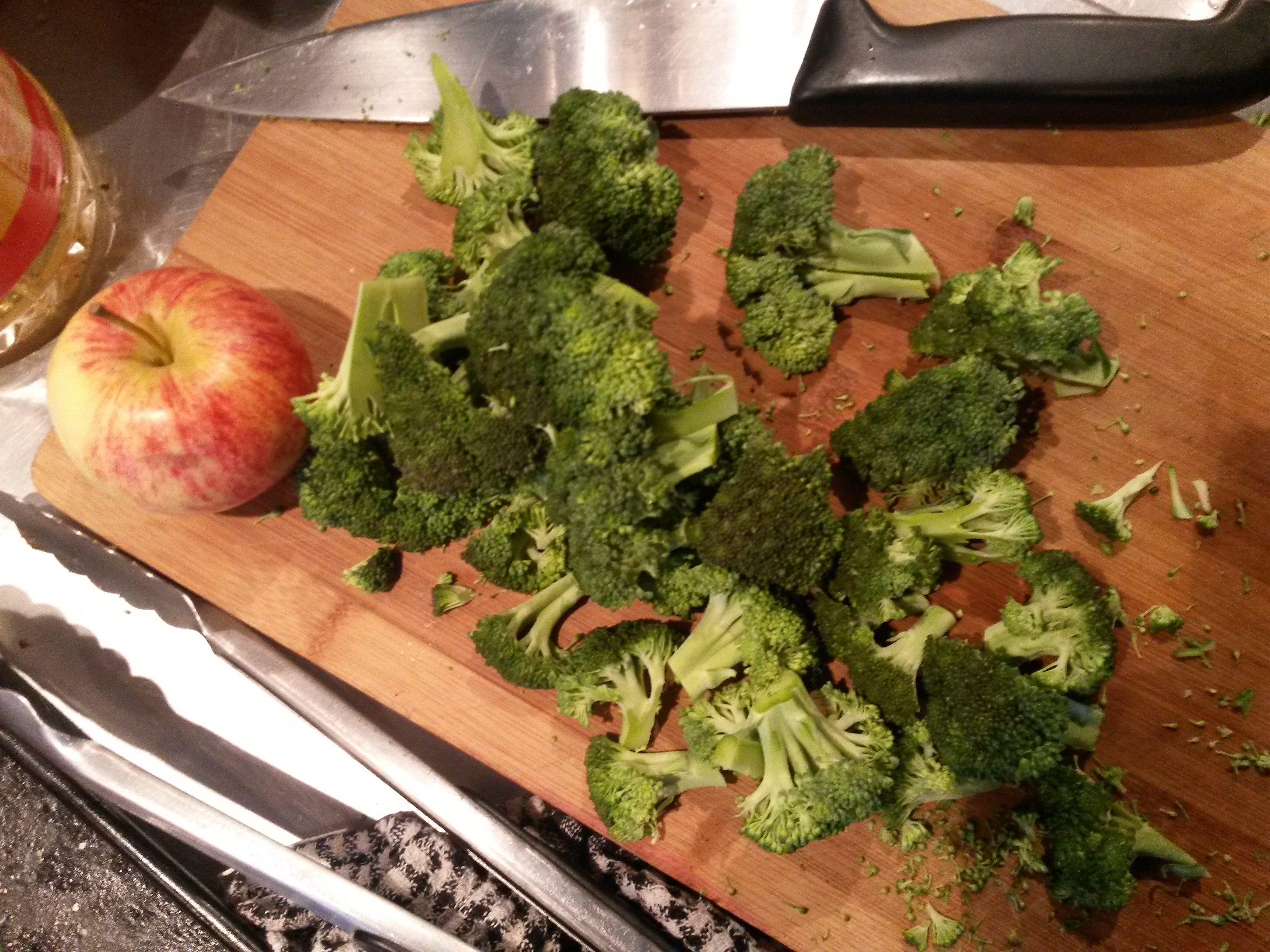 you should keep in mind:

First, if you’ve rediscovered a wilting head in the fridge, you can revive it.

Second, there’s no secret to cooking this stuff; it’s all technique.

For instance, the stems, chopped and fried, are as delicious as the rest. Also, it’s astonishingly yummy when battered and deep fried (though this should come as no surprise, given the unparalleled piquancy that deep frying infuses into any vaguely edible comestible).

To the first point: broccoli should never be limp when served. It should be crispy(-ish) and full of flavour. Wilting broccoli can be revived if you prepare it right — and there’s really only one way to prepare broccoli.

This is the second point: technique. Never boil broccoli. Maybe you think that’s the easy thing to do, but it’s cruel to the broccoli. Don’t be cruel.

Note well: a preference for the easy way is generally a sign that you could improve your disposition toward stretching your skills. Some say character can’t be taught, but I reckon anyone can cipher out that boiled broccoli, especially tried side-by-side with skillet-fried broccoli, has all the taste and texture of boiled worms. That kind of ciphering, right there, is a hallmark of character development. Aim for that.

Anyway, here’s what to do:

First, cut the broccoli into trees. Then, cut each tree down the middle. This is important because the flat surfaces will lay flat on the skillet two steps hence.

Heat up a cast iron skillet coated with a thin layer of oil. When the pan smokes, it’s ready.

Dump the broccoli into the skillet. Use tongs to get the flat edges face down.

Sprinkle salt pepper and garlic to taste (or use a pre-combined seasoning if you prefer).

Check one piece and see that the flat side is a tad browned. Once this condition is met, proceed.

Dribble a small amount of water across the skillet and stir the broccoli around. This steams the top side of the broccoli without wilting it. How much water? I can’t tell you; I don’t know; you’ll know it when you see it.

The broccoli should turn a bright green.

Note that when you added that water, you released the seasonings from the pan and they will have coated the broccoli. This is the most important part of the technique; it’s where the flavour comes from. That, plus the skillet’s patina, which you should never, under any circumstances, ever attempt to scrub flat black. It’s that patina gives cast iron its charm; if charm isn’t your thing, stick with teflon.

Note also: there is an apple in the featured picture. Why? Because there was an apple on the cutting board when I started using it. Why didn’t I move the apple? It wasn’t in the way.

Over the years, you develop these sorts of techniques, and they’re the open-secret to good cooking. I won’t say this stuff can’t be taught, but good cooking amounts to more than good recipes. It’s the skillet, it’s the timing, it’s sprinkling the salt without over-thinking the whole affair. This is the kind of thing you nurture over time, and there’s no substitute for having a go, stuffing it up, and going again.

Same goes for everything else you do, including, perhaps surprisingly, philosophy. Best to keep that in mind when teaching and when learning. Keeps your modesty intact.

…and don’t get me started on asparagus.