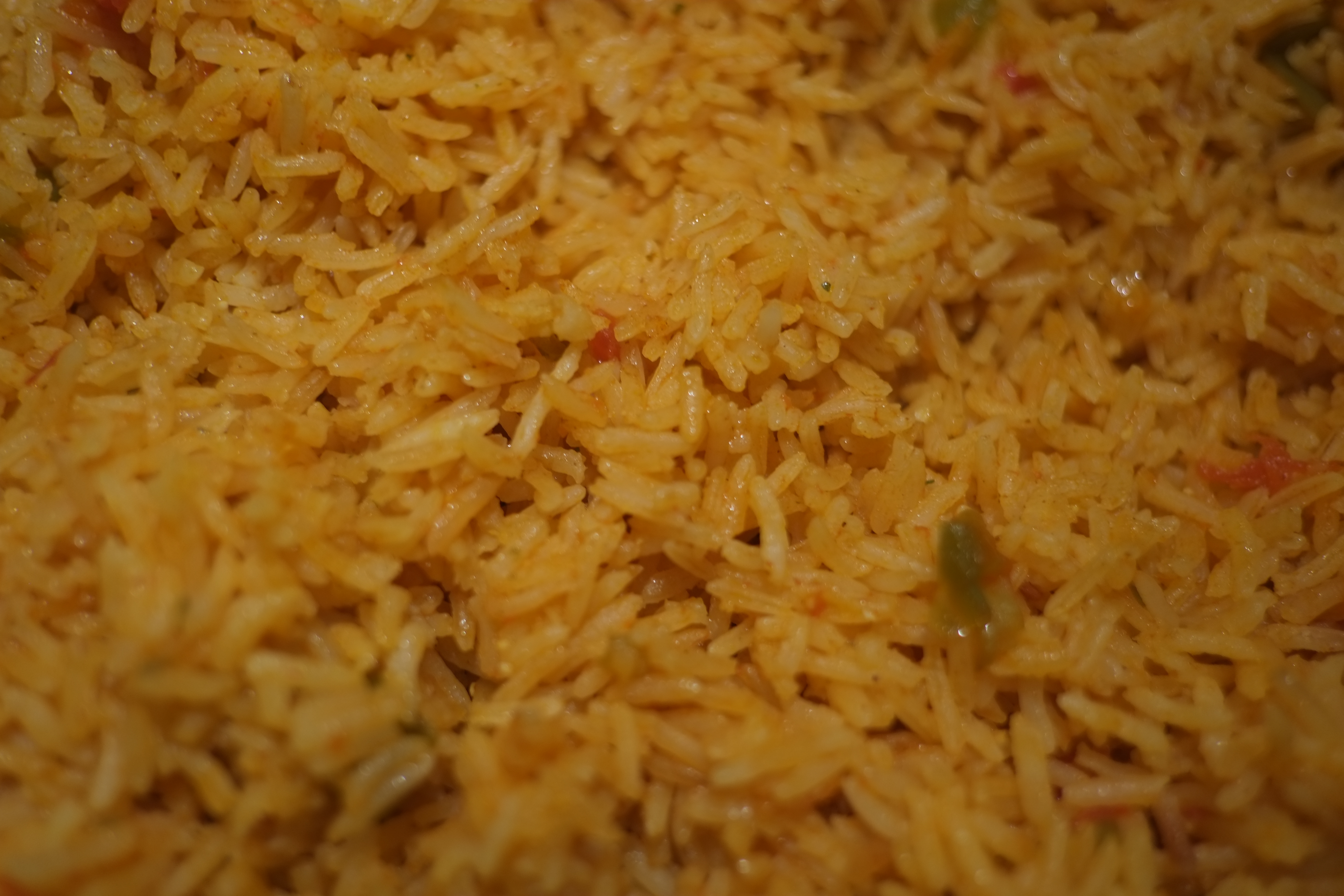 The trick is in the title. Toasting. Though really you’ll fry the uncooked rice first — however, a recipe called “Fry the Uncooked Rice First (Californian/Mexican) Rice” sounds redundant and downright odd, so let’s stick with “Toasted”.

I get it: Technically, to toast is to heat and brown by exposure to radiant heat (at least that’s what the all-wise internet says). Here we’re not going to use radiant heat, which suggests that this title is horribly misleading, but that’s not the worst of it. Wait until you see the ingredient list!

This rice goes well in tacos, in burritos, dished off to the side covered in cheese next to a splat of refried beans — if you’re preparing something even vaguely Mexican, it’ll do the job.

Note well: Mexican-style rice is utterly bereft of pretension, which is good news given my rather sloppy cooking methods. It also has the virtue of making the ingredient list quite a bit cheaper than other ingredient lists.

If you’re looking for a highfalutin recipe, this ain’t it. This falutes pretty damned low, but honestly it’s pretty damned good, because, as is often the case around here, technique is everything.

If you’re allergic to buying packets of prepared taco seasoning, then gather together the following additional unnecessarily expensive ingredients: chilli powder, cumin, onion powder, garlic powder, salt — and do please continue wanking on about how you insist on the finest blah blah blah seasonings. Harrumph harrumph!

If you read the previous paragraph and still think you’re above buying a jar of salsa, then by all means dice your favourite home-grown organic spray free heirloom tomatoes, capsicums, and allium cepa in a delightfully fresh melange of — GACK! Save your sanity and shell out for a fucking jar.

Let’s be clear: regardless of how much effort you put into a succulent salsa of the finest herbs and légumes, it will be utterly annihilated in a pot of boiling rice water. Annihilated. Reduced to a quivering jelly of vaguely vegetable-ish matter. Go jarred. Just sayin’.

Now, in a stock pot over medium heat, drizzle a couple tablespoons of oil. Add a known quantity of uncooked rice. When I say a “known quantity” I mean it doesn’t matter how much, as long as you can replicate that amount times two, which is how much water you’ll need later. I typically measure out a small tin camp-coffee cup of rice because, for some reason I cannot articulate and surely wouldn’t try here, there’s always a small tin camp-coffee cup close at hand in my kitchen. At some point I probably I thought it was an extremely clever scheme to improve kitchen efficiency, but now it’s there. Always. Weirdly.

Anyway, move the rice around fairly continuously so that it doesn’t burn. Note (for the pedants among us), this process is not “toasting”, but it’s what I was thinking of when I typed the title of this recipe using the word “Toasted” first. Oil in a pan sounds a hell of a lot like frying to me, now that I think of it, so please do add a comment or two about my incorrect use of the word “toast”. Oh wait. I shut off the commenting system. So *something* will remain incorrect on the internet! (Shudder.) Such is life.

Soon, the rice will begin to look whiter and crispier. It might even turn a bit toasty brown — hah! There’s where I got the idea for “toasted”! Just don’t overdo this step.

When it looks sufficiently toasty, sprinkle in some seasonings. How much? Like I said: Some. Again, overdoing is bad. You don’t want the rice to overpower other flavours in whatever else you’re serving it with (what a horrible sentence this is).

Next, add some salsa. I typically chuck in about a third to half the stock standard jar that’s occasionally on special at the supermarket, which is, to be honest, the only reason I buy it; the individual ingredients are insanely expensive, especially in Winter, which is when I’m writing this. So. There.

Add water. Twice as much as the rice. That is, two tin camp-coffee cups of water, if you’re in my kitchen. (What the hell are you people doing in my kitchen??!!)

Bring to a boil.

Transfer to low heat until the water has boiled off.

There isn’t much else to do but wait. Rather than fill the boiling time with more recipe-words, I’ll leave you in peace. After the water has boiled off, return here. To make it easier to find your place, I’ll add this splat:

Now that the water has boiled off, turn off the heat — or remove the pan from the heat if you’re not (for some inexplicable reason) using gas. Wait five or so minutes.

Remove the lid. (Please tell me you hadn’t removed the lid already.) Fluff the rice with a fork.

“Fluff” sounded an odd action to me when I first read it in a recipe. Here’s roughly what it means: gently scrape the top layer of rice to expose a lower layer. There aren’t really layers, of course, but pretend. The idea is to give the rice time to dry off. Toasted (Californian/Mexican) Rice isn’t sticky. It’s fluffy.

Continue fluffing gently until all the rice is fluffy.

Now that I think of it, “Fluffy (Californian/Mexican) Rice” would be an excellent title. Damn.