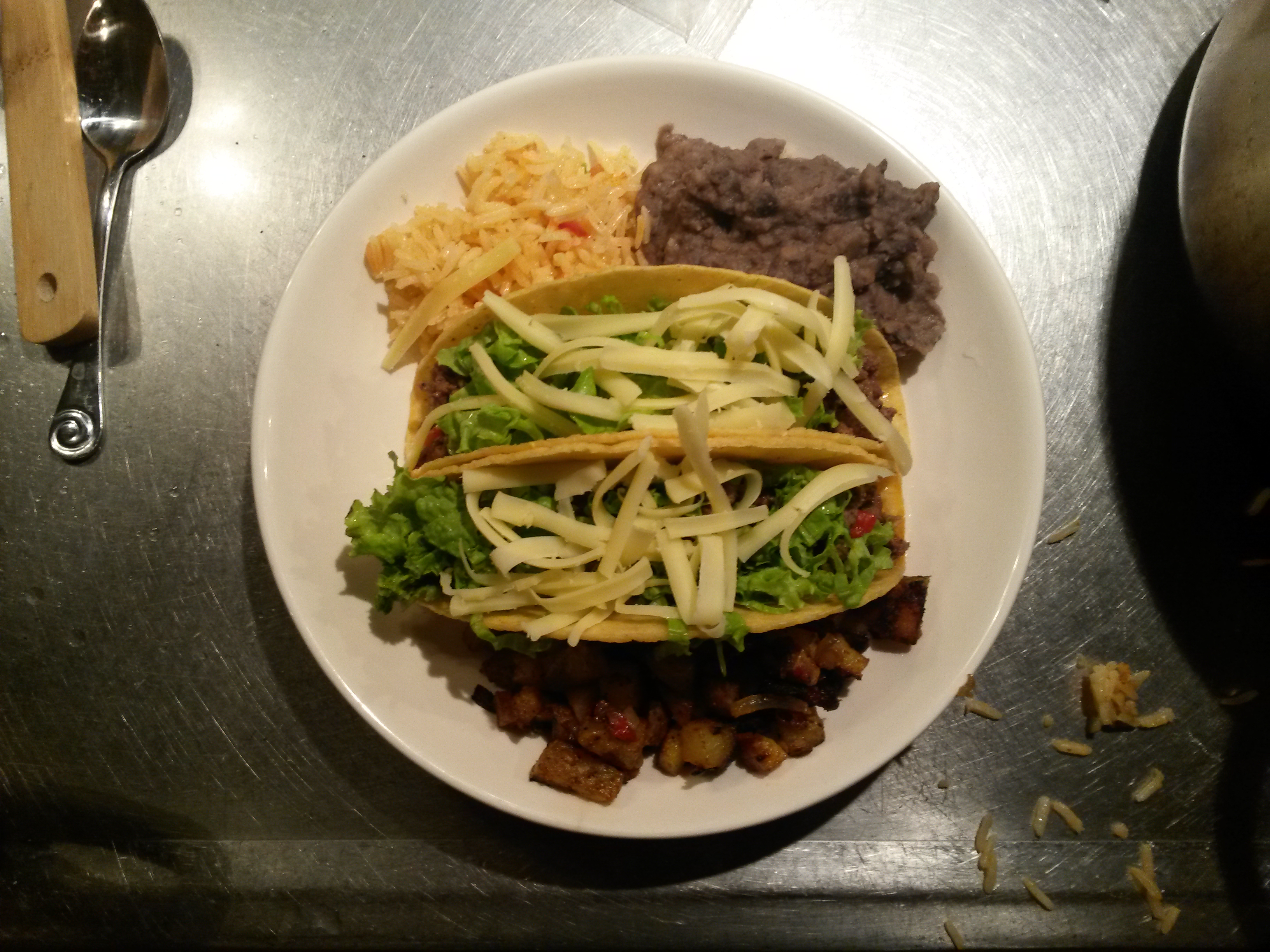 we said when our friend Deb said she would pop over.

More often than not, we have enough stuff in the house to make tacos of some sort. We’re never out of rice. I keep at least one can of refried black beans in stock at all times, in case of emergency. And Tanya’s got the ingredients for tortillas any time, anywhere.

Here’s the thing about refried beans: they’re deliciously amazingly delicious and amazing, but damned hard to make from scratch. To really go the distance, you’d need to soak beans overnight, boil them for several hours, fry them, mash them, refry them — all of which takes nearly as long as the first fifth of a cricket test, which is an insanely long time to invest in beans that you can easily obtain canned. (The idea of canned cricket makes me giggle. Imagine the directions on the side of the can: open tin, wait five days, heat over low to medium flame.)

Anyway, for tortillas, you need:

I had to watch Tanya to get the gist of this, because I have never been able to make homemade tortillas. Now, even though making tortillas by hand is a long process (though nowhere near as long as making refried beans or slogging through a seemingly interminable cricket test), it’s worth it.

First, mix the flour salt and water in the right proportions. Tanya says it’s roughly three to one flour to water. Then knead it. This is tortilla dough. How simple is that? (How can I be so incompetent you ask? It’s a gift. Seriously, it’s astonishing some of the things I can’t do, such as skateboarding, small talk, and floating. Sink like a stone, I do.)

Next: Cut off a chunk. Roll it into a ball, then roll it out with a pin. Alternatively, you might have your very own tortilla press, which is an altogether worthwhile investment, not only for the superior tortillas you’ll make with it, but your own tortilla press scores you some major street cred. I guarantee your street-boasts will not go unnoticed!

Next: Heat up oil / lard / whatever in your cast iron skillet, and fry the rolled-out dough. These are tortillas.

You’ll also need some Toasted (Californian/Mexican) Rice. Best get that started. And heat up that can of refried beans while you’re at it. (Remove the beans from the can first; don’t literally heat the can.)

For this recipe, let’s do the traditional beef mince (ground beef for our American friends) filling. This resembles what you’d find at classic Mexican-American fast food taco joints such as [various corporate entities who would never sponsor me, therefore shall remain as nameless as their beef mince filling is tasteless. Oooh BURN!!]

(Alternatively, you could do a skirt steak or Julienne chicken breast or even (gasp!) fish.)

As usual, a couple of simple techniques will set your taco filling off from all others.

First, heat up some butter or oil in your cast iron skillet until it smokes. Then, add the beef mince. It’ll sizzle and begin browning instantly. As it does so, start chopping it with the edge of your spatula (or turner or fish slice or whatever you call it). You want the pieces the size of peas or slightly smaller.

When the beef mince is nearly completely cooked, add diced onion. (Did I mention that you should dice the onion? Well, you should. I’m not really a planner-aheadder.)

Add seasonings. What seasonings? This matter is up for tremendous debate. You can simply use a packet of taco seasoning and be done with it. I do exactly this quite often because it’s incredibly easy — though I only ever use about half a packet, to be honest, so not exactly this. Exactly half this. Note: Avoid over-seasoning, in general; you want to taste actual meat.

If pre-mixed packets aren’t up your street, then cumin, chilli powder, garlic powder, salt and pepper will mostly do the job. You could chuck in some paprika if you like. Follow your nose. Trust your nose. Let your nose take you to wondrous places you’ve never imagined!

I find it nice to add a bit of thick fluid at this point (keep your mind out of the gutter!), just to get the stuff slightly goopy (*sigh*). If the meat’s too brittle, it falls out of the taco too easily. Though if it’s too watery, it drips out through your fingers, down your hand and arm and settles at your elbow, which makes a horribly embarrassing stain on your shirt. Avoid the worst of this by wearing black shirts.

What thick fluid should you use? Taco sauce! Or tip in part of a beer (drink the rest, obviously) plus a couple tablespoons of plain tomato sauce. Be inventive. Be bold. See the taco in your mind; be the taco in your world.

In addition to these components, I recommend:

To assemble a taco, keep it simple. In the shell or tortilla, put a dab of the mince**, and cover it with lettuce and cheese. Too much mince makes it difficult to eat the taco, so I err on the side of too little. Plus, if there’s less than you expect, you’ll surely eat yet another taco. What could be better?

** Tanya adds: “You’ve got the assembly wrong! You need to lay down a smear of refried beans first to act as a glue for the other ingredients.” I don’t expect you, fair reader, to take sides in a marital / cooking dispute, but I think it’s obvious who’s on the right side of history here. Right?

At this point, you’re done!

Well, not entirely done, maybe. You may want a couple squirts of hot sauce, or possibly some salsa verde, or straight up taco sauce. Anything goes (within reason).

(What’s not within reason? Ketchup. Despite what my dear eight year old Charlie believes (incorrectly), ketchup DOES NOT GO ON EVERYTHING. This kid puts ketchup on mustard, he’s so crazy. Kill the ketchup my friends. Kill the bloody ketchup!)