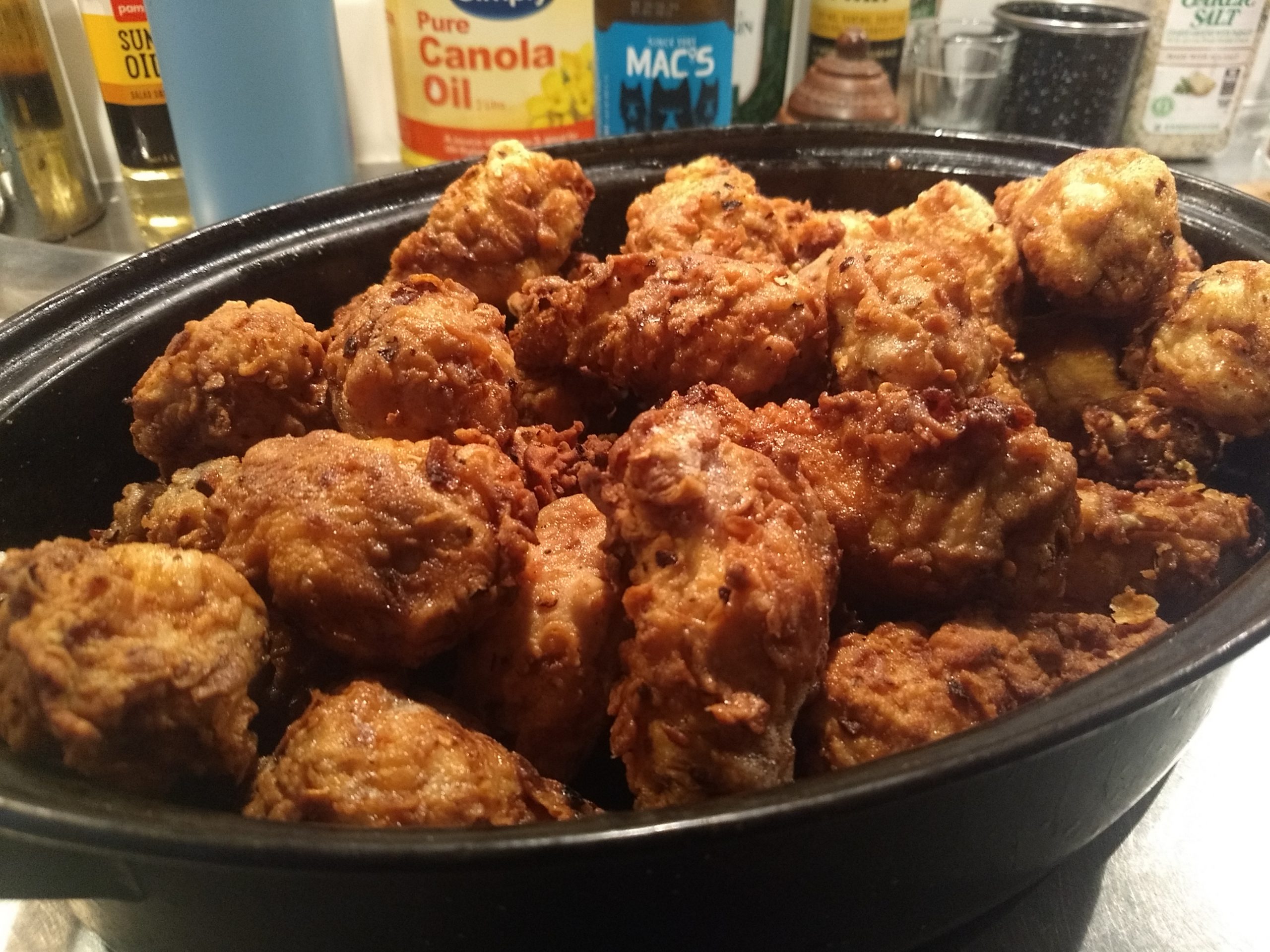 Previously, I wrote about corn flake baked chicken, which is utter rubbish compared to this. This classic fried chicken recipe.

Why do we need yet another classic fried chicken recipe? We don’t. Everyone and his brother knows how to fry chicken. But surely you’ve figured out by now this isn’t really a cooking site.

Why would we even need yet another recipe site? Nadia Lim has the internet sewn up already, doesn’t she? Not to mention Jamie Oliver (couldn’t find his website; whatever).

What the hell is Recipes for Clarke then?

Well, it’s a site where I write recipes that, for some reason, I think Clarke Gayford, the world’s coolest stay-at-home-dad, might appreciate. But not just Clarke.

You realise I used to write a fairly popular parenting blog? I retired it. (But the archives live on. (You can trust that link / server and port and all that. It’s run on a little laptop sitting on top of my amplifier here in Auckland. Totally safe.)) It was simply time to move on to something new. (And so RootBeer.co.nz was born, and its various offshoots.)

What I want to say is that writing makes me happy. I like the low-pressure kind of composition that sites like this involve. I don’t even plan my posts. They simply flow. It’s good fun, and cathartic, you might say. (And I thought it would be funny to dedicate a website to someone who, obviously, and rightly so, would never have the slightest interest in having fuck-all to do with it. Now here we are.)

So look. If you want to make fried chicken like an American. Hello. I’m here to help. I still hold a valid passport. And I still remember enough to hold some authority, I think. (Do I?) Moving on….

Time for a picture:

This was how my first batch started. And here are some of the seasonings:

That’s my favourite garlic salt, a pepper grinder (you can tell because it’s black), and vegetable stock. There are other secret ingredients, but I can’t tell you here what they are (obviously they’re secret!). However, I told you here.

I can tell you that one time I tried onion flakes, but they ended up tasting burnt by the time the chicken was completely fried. I recommend against onion flakes now.

And the thing about vegetable stock: nobody knows what’s in it — and it’s impossible to find out — so it adds a je ne sais quoi. You know — that thing you don’t know.

Plan ahead. You want to rinse the chicken under cold water, shake off the drops, and put it in some kind of vessel. Above I put it in a glass cake pan. Then, salt it, pepper it, give it a few of the secret seasonings — but importantly salt. Let it sit a bit, covered if you’ve got a problem with fucking goddamned flies everywhere all summer goddamnit!

Thinking ahead, the cooler the chicken is when it hits the oil, the more it affects the temperature of the oil (negatively). Consistency is key here, and so a nearly-room-temperature chicken is your friend. (Which is really simple to accomplish if you struggle to make new friends. However the chicken is dead. Bonus: dead friends have low expectations, so.)

Now, dump out a cup or so of flour per flat of chicken parts. (I’m using these little wings because Charlie loves them more than he loves his own arm.) Season the flour. How much seasoning? What am I a fortune teller? You know what you like. Express what you like into the flour! (Why an exclamation point? I dunno. I’m leaving it.)

Maybe start the oil at this point. Put some fire under your cast iron skillet! I do it about half full of canola oil. Why canola oil? Because it’s cheap and tasteless, and so am I! (Exclamation point?)

Now, in a bowl, whip up an egg with a splurt of milk and (optionally) a shot of hot sauce. That’s what’s going on in the picture above. I know; you thought it was a bleeding yolk. Ew. But no. It’s hot sauce.

Does the hot sauce make a difference in the end? Charlie swears it does, and somehow he can tell when I alter the recipe ever so slightly, so, I’m continuing with this technique.

Dip a few pieces of chicken in the egg wash, being sure to get the whole thing coated with egg. (This is a disgusting-feeling thing to do, but it’s essential.) Then, ONE PIECE AT A TIME, put an egged chicken part into the flour. Here’s what I do: I do the egg wash with my right hand and leave my left hand relatively dry for the flouring, so things don’t get too clumpy. Once the egged chicken is in the flour, I use my more-or-less dry hand to fluff some flour all over it. When it’s entirely coated, set it on a plate or something clean and sturdy nearby.

You can take a drop of water on your finger and flick it in the oil. Does it sputter horrifically? Great. You’re ready.

Now, this takes some experience, so don’t beat yourself up if you don’t get it right the first time. Put a piece of floured chicken in the oil. You’ll see bubbles come out the sides. Perfect. Not huge popping-hot bubbles, but little champagne bubbles. That indicates you’ve got the oil right. (The bubble texture will change over time. Don’t worry.)

I typically add chicken to the oil in a spiral pattern so that I know which one went in first. I’ll use this important knowledge when I flip the chicken (we’re getting there). Add enough chicken parts so that you have something like this:

Flip it from time to time to ensure even cooking. And let it go until the colour is “right”. Like this:

Fucking nailed it! Look at that colour! Nice and golden orange brown. Mmmmmhm.

Now, I promised to say some stuff about how to keep the chicken crispy. The pan you see here is special. It’s a roasting pan, but it has a home-fashioned wire grid in the bottom that keeps food off the bottom of the pan proper. In doing this, you allow the oil to drip off the chicken, rather than have the chicken sit in its own oil (think of the fry baskets at Maccas). I store the pan in the oven at a low temperature (between 50 and 100 (I cook in metric, by the way)) while I continue frying. (The mission is to keep the food warm without cooking it further, otherwise it will dry out.)

Inevitably, I have flour left over. So I raid the fridge and find anything and everything to deep fry. Onion rings are an obvious hit. Check it:

Haloumi cheese is absolutely incredible done up like this. Cut it into a thickness of no more than a centimeter.

Broccoli, cauliflower. You name it. It’s deep-fryable. In the end:

I grew up on Johnny Cash. Kris Kristofferson wrote a song that Johnny did a bang up job on: Sunday Morning Coming Down. It includes the lyrics:

That line about frying chicken always got me. You know? Even though we never fried chicken when I was a kid. There’s something in it that I always wanted. I knew from that line that you could feel like you’d lost something — but I didn’t have anything I ever felt would “take me back to something”, when I was a kid. I wanted that. That kind of defined my existence for a while.

Look at me now. And look at Charlie. And look at Ray. (Clarke: look at Neve.) I know you’re doing what I’m doing, and giving the kids something they might get taken back to somewhere somehow along the way.

That’s it. That’s the secret ingredient, Clarke. We found it!

It’s not the je ne sais quoi. It’s got nothing to do with “knowing”.

It’s got everything to do with “being”.

It’s who we are, who we’ve become, who we made ourselves into. This is it, man. All wrapped up in fried chicken. This is life in food.

So, why another recipe site?

This is about taking time. Sharing experiences. This is narrative in ways that recipe sites aren’t.

And there’s no mission, no advertising. No way to make money off you reading it. I wouldn’t have it that way. There’s no happiness in that. Just buy me a beer some day.

He doesn’t get it now; he’s too young. But I still do it. I cook for him every day, the best stuff I can. But if he doesn’t even get it, why do I still do it?

Because this is what I wanted to have — to have possibly lost — but I didn’t. Because I never had it in the first place. The food. The feelings. None of it.

You feel me Clarke? Like when you went back to Gisborne: “There’s no place like it,” you said. I can’t say that about where I grew up — well, I guess I can, but I don’t mean good by it. And that’s what I’m trying to convey here. (In a fried chicken recipe? Apparently, yes.) I want Charlie to think of Auckland — to think of Devonport — like you think of Gisborne. Like there’s no place like it, because of how we made it, not because of where it is on a map. Because of where it exists in our lives. I want Charlie to feel like there’s something to recapture — something about us. And maybe recipes are the best I got, because they’re the most I give.

This might be addressed to you, Clarke, because that’s good for a laugh, but it’s FOR Charlie (and for Ray, but Charlie gets the fried chicken recipe! Sorry little guy.)

Another recipe site: because one day, Charlie, you’ll read this recipe. (You’re sitting in your room playing Minecraft right now, oblivious to the mortality I feel far too often.) You’ll never remember that Minecraft game, but you’ll read this story and you’ll know how much I love you with every memory you can conjure, slurpy as that sounds.

And hot damn could he fry chicken.